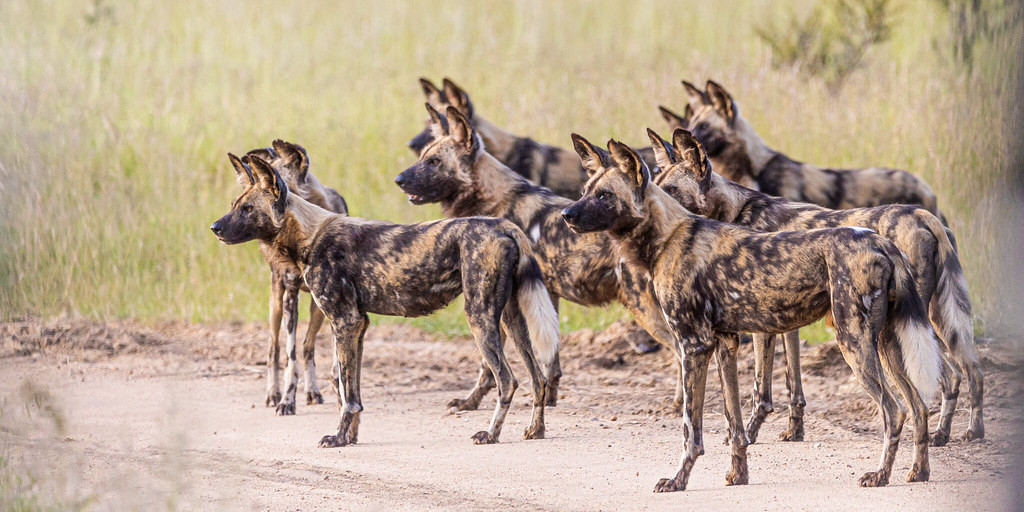 Lions and hyenas and wild dogs – oh my!

Camp manager blogs are written by our current students who each get a chance to lead and manage a group of their fellow students for a period of one week.

This week with Bushwise we were treated to an unbelievable sighting in the Greater Kruger – an interaction between three of Africa’s apex predators: a pack of wild dogs, a clan of spotted hyenas, and a pride of lions.

Towards the end of a typical afternoon game drive we were heading back to campus when we suddenly spotted the heads of two lionesses on the move, with a spotted hyena trotting nearby. We were all super excited, as having hyenas near a pride of lions was bound to be interesting. We continued down the road, aiming to get a better view from around the corner. But when we turned the corner we came to an abrupt halt. There on the road in front of us were not the lions we expected – but a pack of wild dogs relaxing on the road! We couldn’t believe it. Wild dogs are one of the rarest and most endangered carnivores in Africa and are famously difficult to spot. And yet, there in front of us was a pack of 17.

We pulled up to the left of the wild dogs, giving them plenty of space, and sat and watched them. We were all speechless with excitement, not quite believing our eyes. Suddenly one of the dogs stood up and the rest followed, and they started to walk down the road towards us. Holding our breath, we sat still in the car as the whole pack passed by – just a few metres from the car. After they disappeared around the corner we turned the vehicle around and followed them. When we found them again they had stopped walking and were looking out over the bush. We then realised that coming down the road behind us was one of the hyenas we spotted earlier. As it got closer, one of the wild dogs broke off from the pack and ran towards it. In response, the hyena immediately turned around and ran back into the bush, clearly not wanting to pick a flight with the pack.

A few moments later we hear the hyena reacting to loud growling coming from the lions we had seen earlier. We realised the clueless hyena must have run straight into the pride of lions and been told off for coming too close!

We stayed with the wild dogs for a bit longer and they seemed to be settling down again. We then decided to head back towards the lions to see if we could see what had happened between them and the hyenas. As we rounded the corner, we spotted one of the lionesses standing on the road. We parked alongside the road and silently watched as the rest of the pride came out from the grass to join the lioness. The whole pride then proceeded to walk down the road towards us.

I have never been so close to a lion – obviously from the safety of our vehicle and maintaining a respectful distance. It is an incredible feeling to be so close to an apex predator. A lion is bigger than you would imagine and they have a very memorable smell! The pride walked past, close to the game viewer. As they walked they turned their heads towards us and it felt like they were staring right into our eyes.

They continued around the corner behind us and we quickly turned the car around. We knew the lions were heading towards the pack of wild dogs and would be coming up to them in a matter of seconds. The pack of wild dogs suddenly jumped out of the grass onto the road. They were on high alert looking around – they knew something was coming. Then, from down the road, the lioness leading the pride spotted them. She began to chase them (lions are much larger and will attack wild dogs) and the pack scattered in two directions, running off into the long grass and alarm calling. The lioness stopped and looked back at her pride, who came trotting up to her. All the while the hyenas were calling out excitedly in the distance.

As the sun began to set on another incredible day at Bushwise, the lions wandered off down the road and the bush quieted down. Already late for our dinner back at campus, we paused for a quick look at the beautiful sunset before heading back. All of us were in awe of what just happened – and too shocked to speak. To see a pack of wild dogs is incredible in itself, but to see them first interact with a couple of stalking hyenas, and then hear a pride of lions scare off the hyenas before chasing the wild dogs (all in one sighting) was incredible – and an experience that I will remember forever.

The relationship between these three apex predators is interesting. Hyenas are highly successful hunters, despite the common misconception that they only scavenge off others. All three species compete for similar resources – be it food or habitat. Lions killing wild dogs or hyenas is not uncommon. Wild dogs are the smallest and most endangered of the three species, making them the most at risk. To observe these predators interacting in real life, from so close a position, was one of the highlights of my time at Bushwise so far.

Do you want to observe incredible predator interactions for yourself, like Amelia? Apply today and join the next cohort of Bushwise Field Guide students!

The second semester started with a steep hill, but luckily we came prepared and were already ...
BY: Ross de Villiers Camp manager blogs are written by our students who each get a ...
In the blink of an eye the first semester is over! We have learned a lot  ...