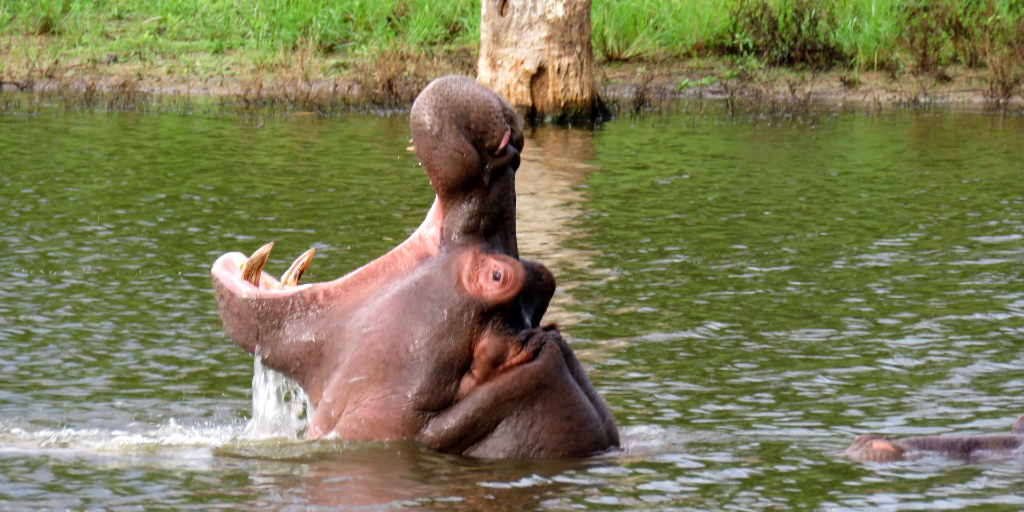 How fast can a hippopotamus run and other gobsmacking hippo facts

One of the savannah’s most dangerous creatures is short, fat, and a herbivore. What is it? A hippo! And we have some gobsmacking hippo facts that’ll prove it.

Among the plumpest of Africa’s wild animals, hippos seem carefree, calm, and oh-so slow. But irritate these orb-shaped savannah occupants and you’ll be up against much more than you bargained for. Why?

Well, do you know the answer to the question, “How fast can a hippo run?” And do you think you’d want to be their prize at the finish line? Probably not. Here are some hippo facts that will fill you in on this feisty African pachyderm.

Are there different types of hippos making up the hippo population? Let’s start with one of the most important of the hippo facts: how many different types of hippos are there on Earth?

The hippo population is made up of over 100,000 individuals that belong to two distinct species.

Pictures of hippopotamuses usually depict the common hippo (Hippopotamus amphibious) – the animals of great girth we see wading in bodies of water on the African plains.

With around 148,000 individuals, this species makes up the bulk of the hippo population.

So, what species can be found on the other side of the hippo family tree? Say hello to the pygmy hippo!

The pygmy hippo (Choeropsis liberiensis) is the common hippos’ smaller cousin, and accounts for 2,000 of the world’s hippo population.

When perusing pictures of hippopotamuses of the pygmy species, you may pick up that they’re much more likely to be snapped outside of water. This is because pygmy hippos spend much less time in water when compared to their colossal cousins.

Here’s more hippo facts on the different types of hippos.

Hippo facts about the different types of hippos Where do hippopotamuses live?

The hippo population lives in wetlands, rivers and swamps in different regions of Africa.

If you search for pictures of hippopotamuses online, you’ll most likely see these creatures submerged in water or standing on land with a water source close by in the background.

And if you look beyond the wetness, you’ll see savannah vegetation or forest foliage as far as the eye can see.

This sets the scene for ideal hippopotamus habitats: plenty of water for lounging, plus tons of vegetation for grazing.

Hippos are herbivores and the common hippo can eat as much as 45 kilograms of vegetation a day. And even pygmy hippos are capable of eating large amounts of greenery at a time.

Because of this, hippo habitats need to have a steady supply of land and water plants on offer to allow these feasting floaters to eat their fill. How much do hippos weigh?

On average, adult human beings weigh just over 60 kilograms – which is also the weight of some newborn babies of the common hippo species!

So, how much do hippos weigh after they’ve had some time to grow? Well, once it’s reached adulthood, the common hippo can weigh in at a meagre 1,000 kilograms, or tip the scales at a whopping 4,000 kilograms.

Their sizes differ depending on their gender, with females coming in at the lower end of the weight range.

While pygmy hippos have their own strengths, they can’t compete with the common hippo pound for pound. The weights of pygmy hippos range from 100 to 300 kilograms.

But even the smallest hippos could fall into the same weight category as a human-sized cement block. And imagine how much strength it’d take to get a heavy load like this moving?

Now, consider the fact that even the heaviest hippos can run at car-like speeds – and when you’re over the shock, pick your jaw up off the floor before we set off to find out more hippopotamus running facts! If you’ve ever seen a hippopotamus running, count yourself lucky.

These bulging beasts prefer to only summon bursts of speed when absolutely necessary – but this doesn’t mean they can’t race you to the finish line.

In fact, some of the most astounding hippo facts are about these rotund creatures’ ability to keep up with a running human being. Here’s a glimpse into the sheer force of a hippopotamus running:

What makes a hippopotamus dangerous? Because pygmy hippos are more likely to flee than put up a fight, this hippo species isn’t a cause for concern – unless aggravated!

But with their size and potential for speed, the common hippo makes for a formidable opponent out in the bushveld.

And the common hippo also comes with a whole host of personality traits that makes it more charming to watch from a distance than to ogle up close.

Here are just some examples of what makes a hippopotamus dangerous:

Some sources report that hippos are more dangerous than lions, and may kill more people each year than crocodiles do.

What really makes the hippopotamus dangerous is human beings being unaware of how powerful and territorial these animals are. And our lack of knowledge may also be the reason why the hippo population is shrinking each year.

Is the hippopotamus endangered? The common hippopotamus is listed as vulnerable on the International Union for Conservation of Nature’s (IUCN’s) Red List of Threatened Species.

The main reasons behind the drop in the hippo population size are:

This bombshell of a bushveld beast is one of those you’d shout out first if asked to list some African animals. So, can you imagine the African wild without the common hippo? By adding to wildlife conservation activities in the field you won’t have to.

On a Bushwise Field Guides expedition in the Limpopo bushveld, you’ll do research that builds on what we already know about the hippo, and adds to global contributions aimed at conserving them.

Take a look at our wildlife research expedition and see how you can set foot in the African wild and learn even more hippo facts from an exciting – but safe – distance.

BY: Tasneem Johnson-Dollie What’s the importance of plants in ecology and field guiding? Well, field guiding ...
This week marks the completion of our last modules and theory exams. It was all about ...
BY: Louise Pavid   Chasing the big five is always the number one priority for most ...