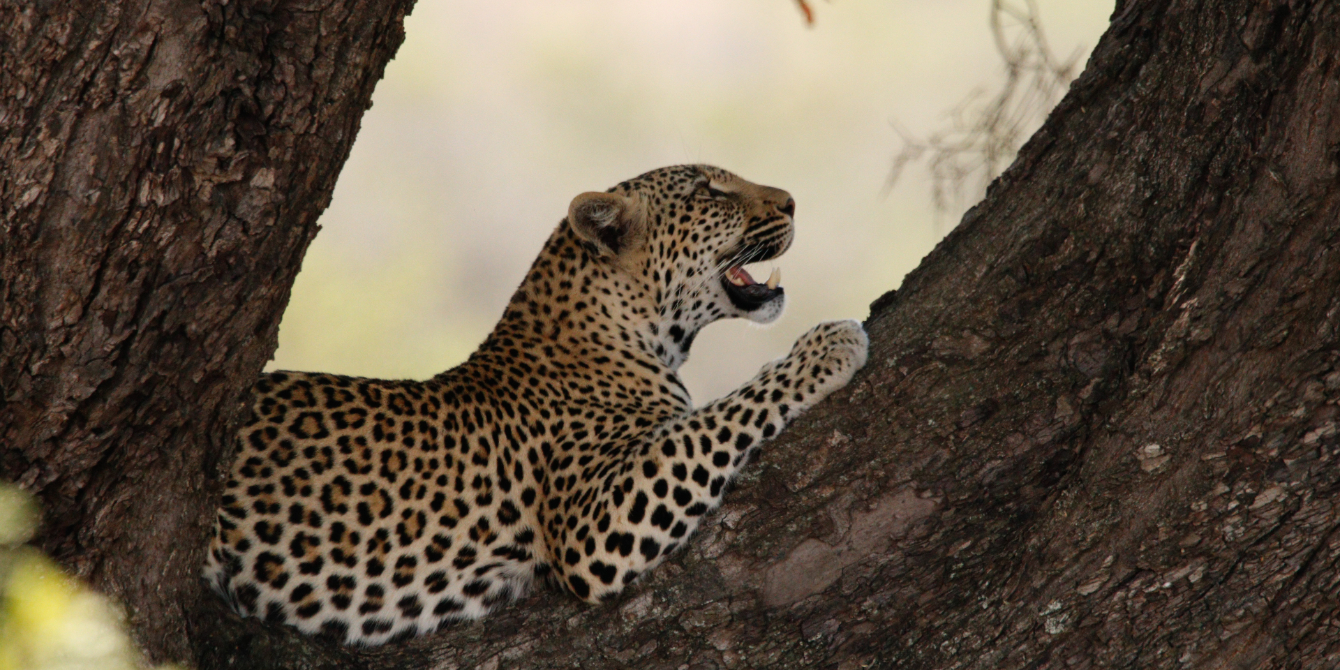 Leopard facts: how leopards are different from other types of big cats

Fangs, claws and silky fur – big cats have so much in common. Get to know your big cat facts and understand exactly how leopards are different from other types of big cats.

The word leopard comes from the Greek word leopardus – a combination of lion (leo) and panther (pardus). This points to the fact that from early on, leopards were considered a mix of two creatures, instead of being seen as their very own breed. But leopards have some striking features that make them stand out from the rest.

How are leopards different from other types of big cats?

Most big cats, including leopards, are classified in the genus Panthera. They’re the clawed cats of the wild that are among the biggest of their kind.

Without the unmistakable mane of the lion, or streaky stripes of the tiger, the leopard is a member of the big cat family that might not be quite as recognizable throughout the world, unless you’ve been on an African safari.

But, these facts about leopards show why they’re just as impressive as any other member of the big cat family. Let’s leap into our first leopard fact and find out why leopards are just as deserving of attention as other types of big cats. Leopards are the least social members of the big cat family

Living in a pride – like lions do – isn’t what leopards prefer.

Leopards are considered the most mysterious, and least social of the different types of big cats. They shy away from interacting with other animals, as well as human beings. Because of this, we haven’t seen as much of the leopard’s way of life as we have of the lifestyles of other members of the big cat family.

Each leopard has its own territory and signals other leopards to stay away by leaving scratch marks on trees, and strategically urinating or defecating in the area to leave a scent signal.

These signs and signals aren’t just a warning for strangers. Leopards have strict rules that dictate when young leopards should leave their mothers and fend for themselves – usually when the cubs are around two years old. And once a cub has left its mother, she won’t take lightly to it coming back onto her turf.

This member of the big cat family spends most of its life living alone. But there are two times in a leopard’s lifetime when you’d spot them socialising.

Their solitary lifestyle and secretive ways make it easier for this type of big cat to survive in many different environments.

Leopards can live in many different places all over the world Most members of the big cat family are happiest in a very particular type of habitat. Cheetahs and lions choose to chill out in the savannah, and lynxes like the cool climates of the forest.

Tigers and jaguars are more widespread across different types of habitats, but the leopard is the most adaptable of the entire big cat family. This type of big cat can live in warm or cold climates, in lush rainforests, arid deserts and almost every other habitat in between. But what makes them so adaptable?

Well, leopards have quite a few things going for them:

Despite these differences between leopards and other types of big cats, leopards often get confused with one other member of the big cat family – the cheetah. The difference between a cheetah and a leopard

People often mistake leopards for cheetahs. This makes some sense, since they’re both spotty wild cats with a shy streak.

But, if you ever saw a leopard and a cheetah standing side by side, you’d immediately see the difference between these two members of the big cat family.

Comparing these facts about leopards and cheetahs will fill you in on the difference between a cheetah and a leopard, and hopefully help you to tell them apart in the wild.

1) One has a bulky build while the other is lean

The leopard is a stalk-and-pounce predator – which means they creep up on their prey and then pounce on them. Because pouncing is a powerful procedure, leopards have bigger muscles, which contributes to their stocky build.

Cheetahs take a different approach. They stalk their prey, chase them at high speed, and then trip them before going in for the kill. As the fastest land mammal, cheetahs are the members of the big cat family with the most streamlined bodies – their smaller muscles give them a leaner, lankier build. 2) Their heads are strikingly different

Leopards have something that makes up for their lack of speed in comparison to cheetahs.

Their much larger heads, like their bodies, are built that way because they house powerful muscles. These muscles give leopards an incredible bite force that far exceeds the bite force of a cheetah.

3) Their markings aren’t the same

And if that’s not enough to help you tell them apart, there’s another defining difference between a cheetah and a leopard. And it has to do with their spots.

Both types of big cats have dots spread across their coats, but these markings are actually quite different.

Leopards’ black markings are called rosettes because of their rose-like shape. These rosettes vary in size, depending on where on the body they are found. Even black leopards have these distinctive markings, but they aren’t easily seen against the dark colour of their coats.

In comparison, cheetah markings are solid spots that are similar in size all over their bodies.

While it’s nice to know how leopards relate to other types of big cats, one of the most interesting relationships today exists between humans and leopards.

The relationship between leopards and humans

Human activity is the main reason why leopards are losing their habitats and being seen in public places more often.

Of all the different types of big cats, leopards may be facing the biggest challenge regarding human activity. They’re the most widespread big cat in the world – which means that there are more opportunities for them to come into contact with human beings.

Because of the overdevelopment of natural environments, humans are taking over parts of the leopard’s natural habitat.

This has seen these usually secretive slinkers seeking food, water and shelter outside of their natural habitats. This can often lead to clashes between humans and leopards, and even fatal injuries.

And this brings us to our final leopard fact. A look at the status of the leopard population today

Today leopards are listed as vulnerable on the International Union for the Conservation of Nature’s (IUCNs) Red List, and the population is currently decreasing. This has seen these fascinating felines becoming the focus of many wildlife conservation efforts.

Losing any more leopards would have a major impact on many different ecosystems across the world.  A career in wildlife conservation is one way you can assist to protect the leopard population.

Further reading: How to start a career in wildlife conservation

Take a look at Bushwise Field Guides courses where you can learn more facts about leopards, and get involved in their conservation, as well as the conservation of other members of the big cat family.

By: Tasneem Johnson-Dollie When you think of a dung beetle, a busy black bug scampering across ...
Field guiding is far more about people than animals. You may spend ten hours a day ...
BY: Luke Potterton Camp manager blogs are written by our current students who each get a ...