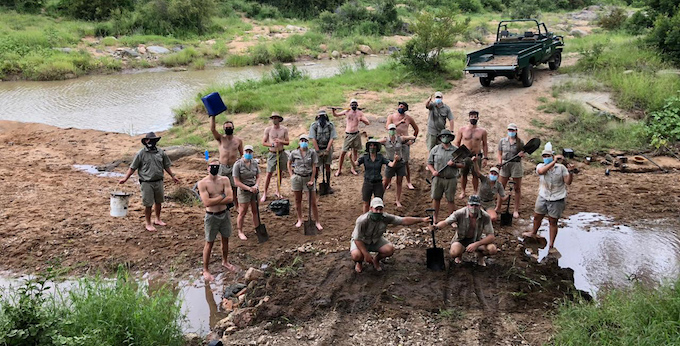 The week started off at the crack of dawn with early morning game drives for both team A and team B.

Guides for the day were Taya, Mat Foulsham and Daniel for team A while team B had Jenika, Erin and Geena as their guides. Team A decided they were going to go east as team B headed towards the western side of the reserve. Team A made use of their secret weapon, which was spotting for wildlife and were rewarded with an amazing sighting of the elusive leopard as well as a sighting of a juvenile African Fish Eagle and an extremely exciting, Eurasian golden oriole, which was a lifer (a new bird to the list) for many of the birders. Team B had an amazing sighting of the African Elephant eating the fruits from the iconic Marula tree. The drives were amazing.

We then arrived back for brunch where Sibu made us yet another amazing meal, which never disappoints.

Jack gave us news that we will all be hands-on, doing some conservation work, so we can carry on our training with no issues. We all agreed and went hands-on fixing the road that was washed away from the Eloise cyclone that happened the night before. After two and a half hours we were all satisfied with the end-product and our hard work paid off. We nearly forgot that later that night we had our much-anticipated sleep out for which we needed to get ready.

We were all excited about it, but we had one issue, the clouds were getting darker and the winds were picking up and so a campfire was going to be a problem for the surrounding area. We all still got ready and were waiting patiently for the final call from our trainers, Jack and Lindi.  The decision arrived that we were going to go and if the weather took a turn, we all agreed that we would head back to campus. Driving there everyone was talking about their night watch and how they feared things crawling up in their sleeping bags while they were sleeping. We arrived at the camping spot where we were greeted with a warm welcome from a herd of impala and a dazzle of zebras. We walked around to double-check if everything was clear and safe to carry on setting up camp, as it was the same area where we had spotted the leopard earlier that morning. Everyone put out their sleeping bags in a circle around the campfire. Andre was nominated braai master for the night and managed to keep up the high standard of Sibu’s food. I, who was the camp manager explained where the restroom will be. All of us set up and were getting the feeling that we are going to sleep out in a big five reserve. The weather remained in our favour for the rest of the evening, as the wind started to die down and the clouds became inexistent and quickly took the opportunity to take a group photo, with social distancing, of course. Andre started braaiing some pork and garlic bread for us. Sibu made us some potato salad to enjoy alongside our braaied food. It tasted amazing as everyone was quiet while indulging in some typical South African cuisine.

First watch started at 21:00 to 22:00 where everyone was still awake, taking in the feeling that nature has to offer for all. Slowly the guides faded way releasing that, they have shifts that are later and they will need some sleep before they wake up. 23:00 everyone besides the night watch were all asleep. Next shift nature decided that it was time to awake and check on what are these weird things in our area. Hyenas calling in the distance all night and Elephants making noises, got the night watches on alert every time. Slowly the night was ended, dawn was rising.

We all awoke and needed our caffeine to keep us awake. Discussions between each other on how it was so possible that we all got such amazing sleep that they all went into a deep sleep. Later that day we had our workbook session and Jack and Lindi had a surprise for us that was a practical observation on trees, grass, and flowers to see where we all are on our abilities. Before dinner would be served, Jared the camp manager had to host the night’s dinner, so before dinner was ready had some news for the guests on a discovery of two giraffes that had dwarfisms and we all were amazed about that news. Dinner was served and Sibu once again never disappointed us by making a chicken ala king with macaroni. Next day it was off week for the students.

Everyone had loads of stories about their off weeks. Some had stayed in Hoedspruit and had loads of fun driving to the Kruger National Park while others went home or stayed on campus. First day back was an interesting day where we all met up at spur and got to hear the stories from off-week. We then all drove to drop off the vehicles at stack ‘n storage. Waiting for the Trainers to fetch us at our vehicles, the heavens decided to open. It was a remarkably interesting drive back to campus in the open-top vehicles as we all got soaked by the heavy rains of the lowveld.

So it was an interesting weeks experience for all and for me doing the duties as a camp manager.