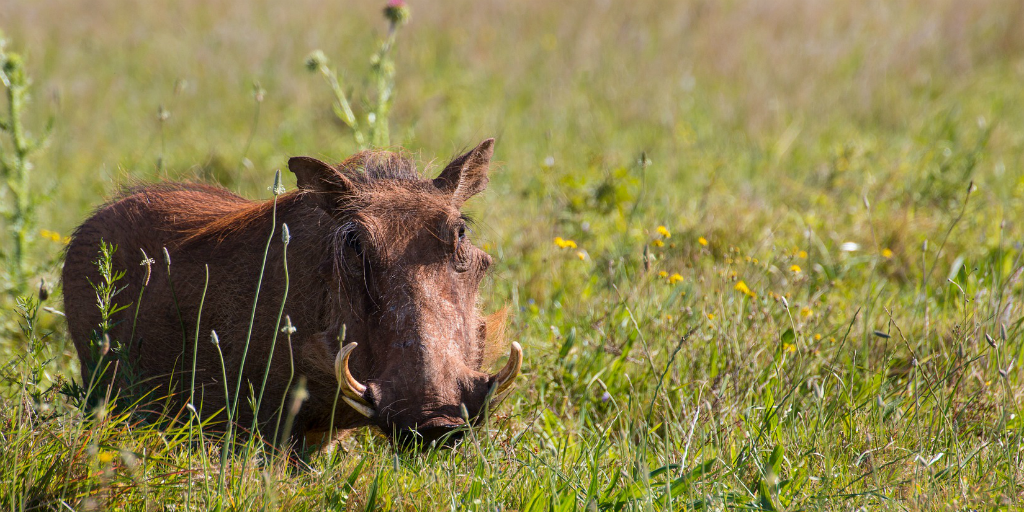 Is Pumba a common warthog?

Original photo: Warthog by Schwingi is licensed under CC BY 2.0

Everyone knows one of the most beloved Disney characters, the Lion King’s Pumba the warthog. But do we know how closely related he is to the real-life common warthog?

The character of Pumba is based on a real-life species of warthog, the common warthog. You can find them in sub-Saharan Africa. Our fictional warthog does look similar to our sub-Saharan warthog, except that Pumba has a smoother, pixelated advantage over the scruffy look of his real-life common warthog inspiration.

But what are some of the other similarities between Pumba and the common warthog we find out on the African plains? Let’s find out.

What sounds do common warthogs make? Original photo: Warthog South Africa by RightSaidFrodo is licensed under CC BY 2.0

If you’ve watched the Lion King, you’ll be familiar with the singing version of a common warthog. But can real-life common warthogs sing? Let’s take a look at the first time Pumba appeared on screen.

After falling asleep in an open plain, Simba is seconds away from being eaten by vultures when a speeding figure rushes onto the plain, scaring the vultures away.

Audiences around the world share a sigh of relief at the sight of Pumba, with a meerkat perched on his head. And just when we think that the scene can’t get any better, Pumba starts to sing.

But what about the common warthog? Can this animal really sing?

Well, according to the San Diego Zoo Global Library, the common warthog grunts, and will occasionally squeal or squeak.

But, don’t be disappointed, because the library also notes that the common warthog can grunt rhythmically.

So when you’re a field guide conducting a tour in the African bushveld, you might be lucky enough to hear the song-like grunting of the common warthog.

And hearing this music out in the field may just set you up with no worries for the rest of your days, as the song goes.

Is the common warthog as friendly as Pumba? Original photo: Hippopotamus by kolibri5 is licensed under CC BY 2.0

In Swahili, “Pumba” means foolish or silly – a fitting name for our happy-go-lucky warthog. But, is the real common warthog just as friendly?

Well, even though the male common warthog lives a solitary life, while the females look after the young, when warthogs meet in the savannah, they greet by rubbing their faces together. It’s like a warthog-hug.

And, during the scene of the Lion King where Pumba and Timon sang “The Lion Sleeps Tonight”, and Nala the lion jumped out to attack them, the common warthog would act just like Pumba did, avoiding a fight and fleeing instead.

In fact, warthogs don’t often show aggression, except during mating season when the male common warthogs will fight one another.

Do common warthogs smell or is it just Pumba? Pumba has a terrible odour, which is why he doesn’t have many friends, but he also has some bad manners, like farting way too much.

Did you know that Pumba was the first Disney animated character to fart on television?

There’s isn’t much evidence suggesting that the common warthog is as smelly as Pumba, or that it emits smelly gasses. So, being smelly may be a characteristic that’s unique to Pumba.

Common warthogs and meerkats: can they be friends?

One of the most famous fictional friendships in the world is the one between Timon and Pumba. In almost every scene in the movie, we see Timon riding on Pumba’s back, singing a song or two.

Did you know that meerkats climb onto warthogs to feed on ticks and other parasites? So somewhere in Africa, there might actually be a Timon-and-Pumba friendship. Original photo: Meerkat by Alexas_Fotos is licensed under CC BY 2.0

Would a common warthog adopt a lion cub?

When Simba meets Timon and Pumba after Pumba saves him from the vultures, audiences experience hope for the lion cub.

The first thing Pumba asks Timon once he realises that Simba is only a cub, is “Can we keep him? Can we please keep him? Oh, I promise I’ll walk him every day. If he makes a little mess, I’ll clean it up!”

And so Simba enters a new way of life, away from his home at Pride Rock. We see Simba grow up with Timon and Pumba as they teach him new songs and melodies.

Simba and Pumba form a sweet surrogate father-and-son bond that may leave you wondering if this bond could overcome the real-life nature of a predator-and-prey relationship.

Well, when Timon responds to Pumba saying, “You’ll be his little mess. He’s gonna eat you and use my body as a toothpick,” he gives us a good idea of what might actually happen if a warthog got too close to a lion in real life.

How did the common warthog get its name? Original photo: Warthog Safari by Elleithyia is licensed under CC BY 2.0

The common warthog earned its name from its protruding wart-like glands on its face. But the glands are actually not warts.

The growths also help with protection. But how?

They fight by charging towards one another and ramming into each other’s faces. Their growths act like padding to protect them.

The common warthog population in Africa Original photo: paraa_70 by jnissa is licensed under CC BY 2.0

The common warthog is listed as “least concern” on the IUCN Red List of Threatened Species, but the population is decreasing.

Threats to the common warthog species include natural disasters like droughts, and human threats, like hunting. Warthogs are often victims of trophy hunting.

Trophy hunting is when wild animals are killed for sport, and the animal’s head or other body part is kept as a souvenir or trophy.

The common warthog, like all other wild animals, is important to wildlife ecosystems. By becoming a field guide, you can help with the conservation of wild animals.

Learn more common warthog facts and facts about other wildlife. And to gain a deeper understanding of wildlife and ecosystems, see how you can become a field guide.

BY: Annie DuPre, FGASA NQF2, Apprentice Trails Guide and Bushwise Copywriter The first growl was so ...
BY: Chloe Potier, Bushwise Student 2020 After a well-deserved rest week, we started our week in-full-force ...
BY: Francois Theron, trainer at the Bushwise Mahlahla campus One is often confronted with the question ...