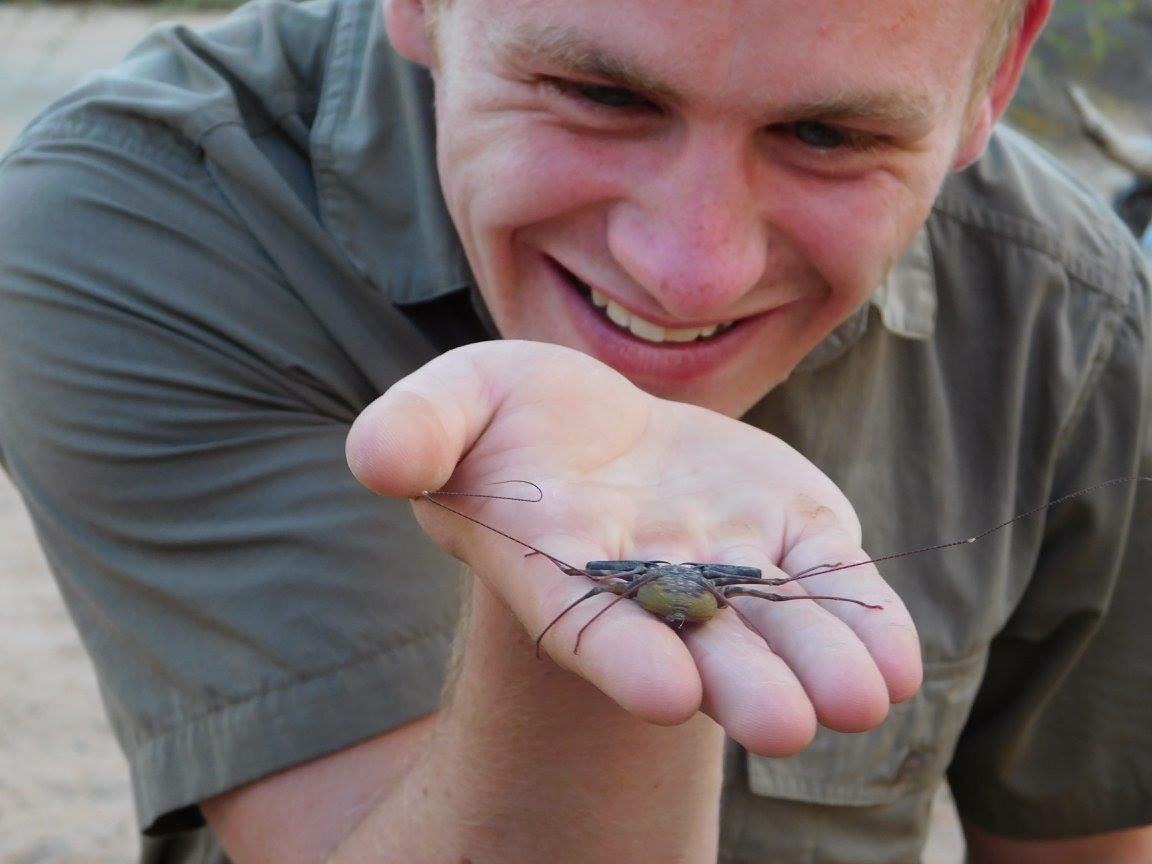 Creepy crawlies are what we call them in the UK, you read stories as a kid about hungry caterpillars, are told about friendly bees that make honey and sing songs about spiders going up drainpipes. That’s alright for back home, but out here in South Africa the caterpillars eat poisonous milkweed which the Monarch Butterflies retain through metamorphosis so are also poisonous, the Bees are killers potentially, even the elephants don’t mess with them and many of the spiders that like to live in your house are venomous enough to put you in hospital! This may seem a little scary, but then the UK’s wildlife does seem relatively tame compared to a lot of places around the globe. We might respect ours a little more if it could kill us, but ours is just as amazing and dramatic when you pay attention to it. It’s the same out here in the Bush the big animals are obvious, plainly dangerous if you get on their bad side. You really need to pay attention to what’s on your doorstep or living under your bed, tiny little Button Spiders and Sac Spiders, so highly venomous it seems a bit overkill for the flies and other small insects they eat. The big spiders like your Orb Web Spiders are pretty much harmless to humans, but still it’s not fun accidentally driving through their massive webs that can stretch across the roads. Another large spider that is a ground-dwelling hunter, the Baboon Spider which can live potentially 20 years and is a protected species here. The females dig holes in the ground lined with silken web and live their whole lives inside them, whilst the males are more mobile hunters that have to search for their lady loves lair.

One of my favourite types of spider is the Jumping Spider family, small little dudes that have an incredible powerful leap, the equivalent of us jumping over at least a 3-story building. Completely harmless to humans but deadly little hunters in their own right, they come in a huge variety of colours and occur in numerous different countries. There are thousands of species you’d have to spend your life studying them to be able to identify and individual species. For some reason I seem to have made friends with them, having had about four so far just appear on me and just hang about being awesome for a while. Inside at night, a mosquito net is very useful especially  during the summer here, to avoid those mozzies, moths and other biting critters. The moths here are mostly similar to any others, but there are several that break the mould and are quite impressive such as the King Monkey Moth. The insect life that swarms around the lights outside does mean that you get some more friendly house guests in geckos, big ones such as Turner’s Tubercled Gecko, that do a great job eating some of those moths and mozzies. Then there are tiny little ones that you find inside your mosquito net! This fella I found one morning as I woke up, tailless but Geckos can regrow them as it’s a predator defence mechanism. I tried to release him into the wider realms of my room to go about his life, but a few days later I found him again inside my mosquito net. This is just a little slice of the day to day since I began Bushwise back in January, I haven’t even gone into the skinks, frogs, beetles and bats that live on campus, as well as the several snakes that have made an appearance. It’s mid-April now and winter is starting to set in here in South Africa, the general temperature is declining and with it, the activity of a lot of the insects and reptiles will do so as well.

So if you find yourself out in the Bush, remember, the big animals are obvious, look closer at those smaller things living around you and who knows you may be surprised by what you discover!

Blog and photos by Jack Broadley – currently on his work placement This week started off with a bang, quite literally! The Bushwise students have been split into ...
Original image: Cinnnamon and blue-winged teal at Seedskadee National Wildlife Refuge by USFWS Mountain-Prairie is licensed under CC BY-SA ...
In the blink of an eye the first semester is over! We have learned a lot  ...