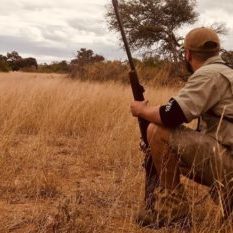 Practical trails course, what an experience

These two weeks at Lowveld trails were to get our apprentice trails guiding. This means that after gaining our ARH (Advanced Rifle Handling) & passing our theory on trails guiding we needed to get some practical experience and assessment. This was done with a 12 day course where we take turns operating as a back-up guide, fully equipped with a bolt action rifle and the responsibility that comes with that.

Note: Some pictures you might see are of us holding rifles while viewing animals or holding skulls or skeletons of animals. At no point are we hunting!!! At no point are we attempting to kill an animal in any way. The reason for our rifles is as a last resort measure in case an animal charges and we are unable to dissuade it from this charge. The motto of a trails guide is to view animals and educate people on them without intentionally disturbing the animals.

On Tuesday the 4th of June we set off on our 12 day trails course. We were able to grab some breakfast in town before heading out and around 12 we arrived at the reserve in Kruger with Wayne and Brendan who head up Lowveld Trails. Here we split up into our two groups with group 2 going directly on the 3 night primitive hike (i.e. no base camp, carry all your food and equipment and sleep under the stars while taking turns on watch duty). We drove on to our base camp, this camp was insane!!!! It’s so nice being out in a camp again.

We got briefed on the proceedings and learned that we do primitive when the other group arrives in 3 days, after our primitive we go to a different reserve and into an old farmhouse. I am not sure whether I am going to prefer that or not, the luxury, aka hot shower, nice beds and flushing toilet, will be nice but not sure if I will prefer that over the nice rustic outdoors feel.

Anyway that afternoon we went on our first hike, it was only a short one of about 2 hours but I was to be the backup guide. This means I was carrying a loaded rifle and having the responsibility of a back-up guide!!!! It was fucking amazing!!!!! I was very nervous at first but that soon dissipated and I could enjoy the experience, especially when we had our first encounter with an elephant herd!!!! We saw them on the other side of the drainage line and after testing the wind and ensuring we were approaching from downwind, we headed through the drainage line to the other and got to within 40m of the elephants and watched them eat for a while. Wayne provided me with an escape route into the drainage line and said I was to take the group down it if shit hit the fan, luckily it didn’t and I was charged with leading the group out of the encounter. Later that day Mersin (my once roommate at Bushwise) spotted what he thought was more elephants but ended up being a group of 5 rhino, again we approached downwind and got to within roughly 40m. As they were grazing in our direction we only stayed a few mins before heading out again without them being aware of our presence, a perfect encounter. Overall I would say this was an amazing first day and an amazing first experience at being a back-up guide even though I didn’t do the briefing.

Sleeping in tents was pretty intense but it was amazing, we had Kudu fillet and Boerewors (the South African version of Bratwurst) for dinner, grilled on the open fire and we sat around the campfire until about 21.00 (pretty much midnight for us these days). During the night you can hear the Hyena and it’s an experience going to the toilet in the middle of the night with hyena calling what sounds like only meters away. This kind of set the tone for the next few days. All we saw for the first 6 days were Elephant and Rhino but it was amazing to see those. One of the evenings we were sitting around the campfire and the entire evening we heard a herd of Elephant feeding in the drainage line about 5 meters behind us and at some time they passed right by us!! We also covered some tracking, botany and other relevant topics for both Trails and general guiding. We also learned from every encounter we had in terms of what and what not to do in those situations and how to use the elements in our favor. Afternoons were filled with siesta and filling in our logbooks, evenings with sitting around the campfire and going to bed around 9/10 pm.

On the 4th day as the other group came back into the camp and after we had lunch together, we packed our bags for the 3 night primitive hike. Sightings during these days were similar as before and nights were quiet with nothing coming into camp, though we knew not to relax as there are plenty of stories of other types of sleep outs. I got very lucky on my walks where I was acting as back-up, as we tended to see animals on those days. This was great as it is a much different experience when you are carrying the rifle and responsibility as opposed to being a guest. You never want to need to shoot an animal but you are responsible for the guests and if any harm comes to them you are in a world of hurt, yet at the same time if you are too trigger happy and shoot an animal without giving it the benefit of the doubt then you will be in a world of trouble as well. The key is to read the animal’s behavior and be able to act accordingly to avoid any negative outcome on either side.

Overall primitive was amazing and although it was tough, especially trying to stay aware and scanning your surroundings whilst hunched over with the weight of the heavy backpack. We slept in river beds and hiked through terrain few people ever truly see. In general the terrain is very flat, this makes walking super easy, especially compared to the hobbly bogs of Ireland. It did make me miss Ireland though and cannot decide which I prefer. Effort wise and especially risk of twisting an ankle S.A. is definitely the better one as I struggle with the steep inclines of Ireland in terms of breathing, especially with the heavy packs, similarly after my torn ligaments my ankles are very week and I tend to twist them very easily, falling in the process. That said, I find the scenery here quite boring at times and miss the rolling hills, waterfalls and views of Ireland or other hilly/mountainous areas. This was punctuated on the last day when we had the Drakensberg mountains in the distance, this made the hike 10x better. What makes the bush so remarkable though is the animal presence everywhere, even when you don’t see them and not just the big 5 but all the birds and small critters as well.

On the last day we made our way to our camp and promptly packed up and left for the other reserve to stock up on supplies and sweets. After this we went to the farmhouse. It was definitely nice to have a proper toilet, shower and bed, though at the same time it took away a lot of the outdoorsy nature of our 12 days, still not sure which of the two groups is the lucky one here.

The first three days at the reserve we saw no big game but that changed on the 4th day when I was backing up again, this day we saw Lions as we were tracking a White Rhino. Over the next few days we actually saw a decent bit and we managed to round off our entire big 5. The best of the sightings though came the afternoon after the first Lion sighting…

It was a windy and cloudy afternoon, perfect weather for this ambush predator as it masks their movements through the bush. Wayne, our guide, told us that it was often days like this that this predator would go out and make several kills and stash them up trees for later consumption. As we were tracking Buffalo we came across some really fresh tracks and decided to stalk this stalker, they were leopard tracks. From where we found them they moved into a drainage line and we meandered in and out on the trail of this leopard. From the size we assumed we were on the trail of a male leopard and as we moved to catch up with it we could follow its path in our head based on the Squirrel alarm calls moving off into the distance. After about 15 mins we came to a bend in the drainage line with steep embankments, the Lead stopped and they were pointing down into the drainage line but I could not really catch what they were saying as I was 4th in the line. Out of nowhere comes a massive roar and I see our Lead shoulder his rifle and almost at the same time I saw a white tipped tail disappear into the bushes and caught a glimpse of the leopard bound off into the distance. What a sighting!!! This is often normal with Leopard in that you hardly ever see them, especially on foot. Normally if they become aware of you they will simply disappear into the bushes and you will not even know you walked straight past them. For it to have come out means we must have disturbed it and the reason became clear shortly after when somebody pointed to a nearby Knobthorn tree and asked ‘What is that in the tree‘. It turned out to be an 8 week old leopard cub in the tree. What we believed was a male turned out to be a female and we accidentally caught it at it’s den. This was now a highly dangerous situation and something that we would normally avoid if we would have been aware of it. Although it was also probably one of the cutest sightings ever, we made so to not make any move towards the cub as the mother was likely observing from somewhere nearby. We decided to move off and let mother and cub reunite. What a sighting and what lesson to learn, if the group had been any smaller or the Lead had been on their own there is no doubt that the leopard would have continued on her charge and gone for the kill, one of the many reasons to never approach a mother with child, regardless of the species.

The rest of the days passed very similar to the previous ones and we had great fun around the campfire every night and enjoyed our time out in the bush, all too soon the trip came to an end and we had to pack up and head back for one last night at Bushwise campus before each of us headed on to our separate placements. Below some more great pics of our time on trails.

Blog and photos by Jelle Linssen