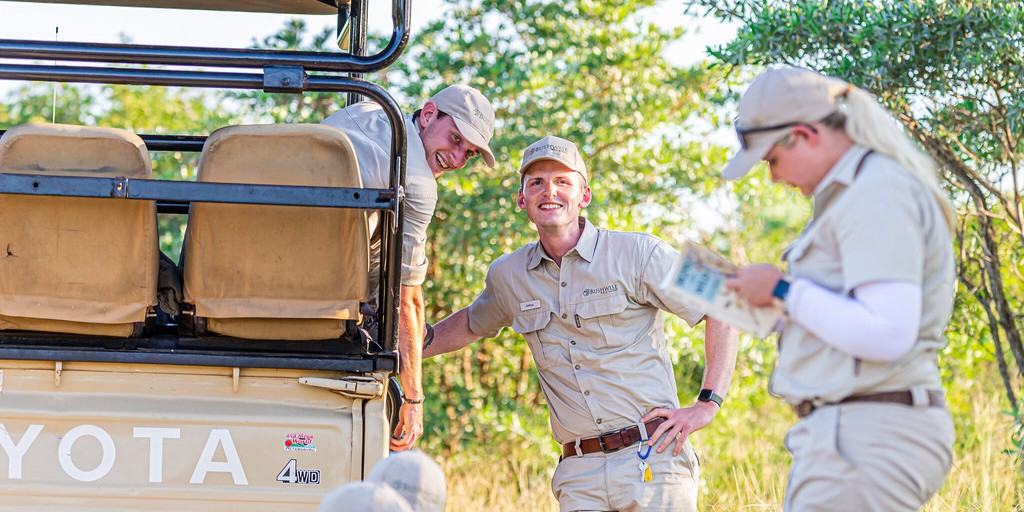 Fauna and flora, one species at a time

Bushwise student Petri Oberholster shares how he’s learning to identify the nearly endless species of fauna and flora you’ll see in the Lowveld.

When I initially arrived at the Bushwise campus, I wasn’t sure what to expect or what practical skills and knowledge was required to become a field guide. However, soon after we went on our first instructor-guided game drive, it became evident that I needed a lot of knowledge of fauna and flora as well as their complex ecosystems.

As someone who grew up in the city, I didn’t necessarily recognise the subtle complexities that can be appreciated with adequate knowledge and training. I realised that there was so much to learn about tracks, botany, geology, birds, mammals and ecosystems. At first the amount of knowledge I had to gain felt overwhelming.

However, as I spent more time out in the bush practising and learning with the instructors, I soon realised that little by little I was learning to identify the different plants, tracks and animals. This process started by taking little steps at a time and focusing on detail. I soon realised that it was far better to start with one species and focus on each of its characteristics, than just to learn about everything in general.

During our time at Bushwise we are assessed on each of both fauna and flora (animals and plants). For flora, there are various characteristics that one can use for their identification. The ones I like to focus on include leaf form and structure, bark, branches and flowers. Different characteristics and behaviour can also be applied to discern between various different species of fauna. We also focused on the identification of amphibians, mammals, reptiles, fish, birds and arthropods.

In the process of learning all these characteristics, a whole new world opened up to me and I started to notice and appreciate nature more. I could suddenly identify the specific butterfly species that would fly past me on my walk to class in the afternoon. I could even use the tracks that were left on the path during our morning and afternoon drive to identify what animal had left them.

Recently, I’ve learned to identify the tracks of an African civet, a genet and a leopard. I also now know the marks left by an Eastern olive toad. I’ve begun to notice more than just a blur of trees, shrubs and grass while on a drive – I started to differentiate between each tree, shrub and grass, and pay attention to their role in the ecosystem and how they are utilised by local communities. Each has its own uses from medical to spiritual, not just shaping the land but also the culture and traditions of the local communities.

When my first practical mock assessment (game drive) started, I had the opportunity to test the knowledge I’d gained during my theoretical and practical training. When I identified different plant species, I could finally put my hours of studying to practical use. With relative ease I was able to distinguish between certain plants, like a sickle bush and false thorn, or zebrawood and silver raisin. At the end of the game drive, I really felt that all of the time and effort I spent in the bush was paying off – I had gained an immense amount of knowledge in just a few months.

Our next big assessment required us to identify animals – including mammals, reptiles, fish, arthropods and amphibians – by sight and sound. The weekend before the assessment, I prepared by looking at tons of different images, studying them and their unique characteristics in detail and furthering the knowledge I had gained in the field. I played the sounds over and over so that I could identify different mammals and amphibians on sound alone.

I will always remember the early morning drives past the pan where frog calls were clearly audible and how I would try to memorise and identify the different sounds. The same applies to the mammals, I used the same technique to remember their calls during our game drives when I would practise identifying them in their natural environment.

As the assessment started, all the practice again paid off. Each sound I had meticulously studied and practised was decipherable and each image they showed was easy to identify. I finally knew that all that time in the field was worth it.

What if you too could identify fauna and flora just by listening to their sounds or looking at their leaves? Apply today and join Bushwise to learn all this and more.

After a busy last week with tracking, this last week has been a bit more relaxing ...
The final week of Semester 1 already! On Tuesday evening, with land rovers and cruisers alike ...
A past Bushwise student and recipient of the Annual Bushwise Scholarship Thabisani Buthelezi (Ernest), now works at the ...