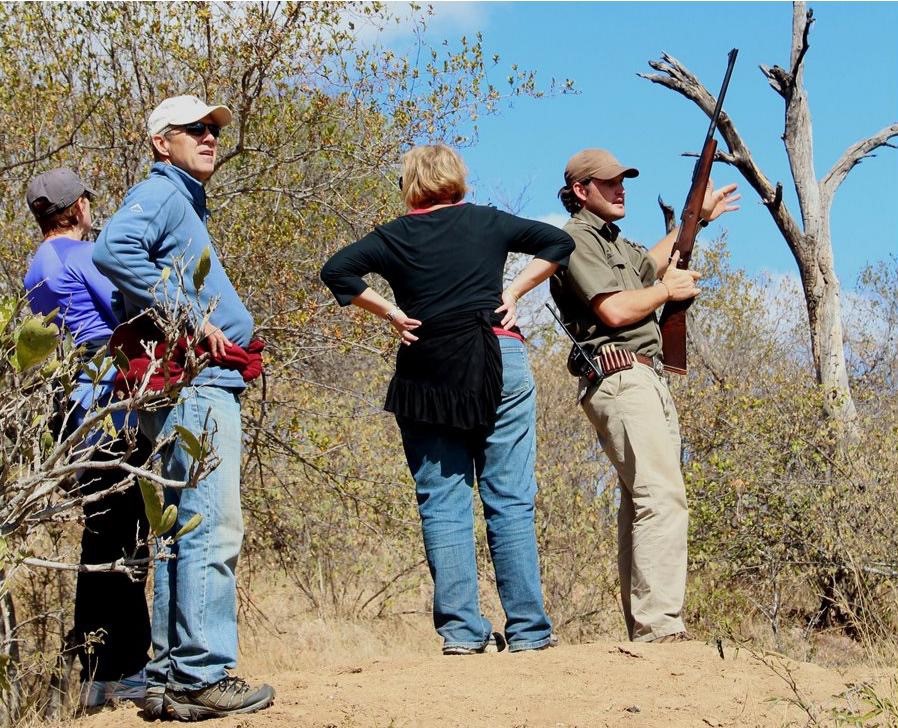 Advantages of field guiding for a researcher

The guide is an entertainer, a socialite, a person often living the holiday dream. If guides did guiding just “as a job”, their motivation would not make it worthwhile. Working 17 hours a day, having to keep happy and cheerful day in and day out. From before the sun has risen, till after the last, drunk, holidaying guests have gone to bed, the guide is around, answering the same touristy questions over and again, living off a tiny salary and relying on gratuities for any sort of viable income. This quickly takes its toll on those less passionate. Yet for the guide who does this job as a lifestyle, waking up each morning ready to showcase the splendour of our natural heritage, who takes as much joy as the guests from seeing our wildlife (big and small) and spending the hours in the bush, celebrating and being the ambassador of nature to all those who care to listen! To this guide the hours are short, and the pay is worthwhile!

On the other hand, the researcher is usually far less social, to a point where we often find the best researchers are those stuck in the middle of nowhere, with minimal resources, working on subjects that would send most people to sleep before the introduction was finished! Where data deficiencies; materials; methods; and logistical issues are the topics of a fireside discussion, rather than the scary, near-death encounter, stories that many a guide indulges in.

Now in today’s times things have changed a little… we find a new breed of researcher, one who is considered to have a healthy dose of “normal” – whatever that may mean. Researchers and scientists of today generally agree that it’s no longer viable to study and live exclusively in the science bubble, especially when dealing with wildlife studies of rare and endangered species, or conservation issues. Take the pangolin as an example, a very strange, unique looking species which very few “normal” people know very much about. Many researchers have done work with these amazing animals, and we know quite a lot about them thanks to all the research efforts, yet somehow the pangolin still remains the most trafficked animal in the world! But if the researcher could find a way of making the pangolin cool – rephrase that, pangolins are already cool, rather  if the researcher could showcase HOW cool they are – to a non-science audience, and showcase the research findings, the short-comings and challenges etc, then suddenly the world becomes a bit bigger, ideas start coming in from the most unexpected places, and the research comes alive with new potential!

I recently had the privilege of experiencing just that phenomenon. We had a group of artists visiting South Africa, and we exposed them to talks and insights with a few of our top specialists in various fields of conservation ranging from vultures through to pangolins. It was amazing to see how people who had nothing to do with science, could collaborate, and inject brand new ideas and concepts into the various conservation dilemmas that researchers have been grappling with for years. That course ended with a bunch of people, from all walks of life, exposed to our conservation issues and keen to spread the word, and a gang of researchers with fresh ideas to take back to the field for implementation!

The science stalemate stems from an initial problem we face. We tend to cherry pick our audiences. If we like bird watching, most of our friends are those with similar interests thus probably also know about birds. News about rare birds; or good birding spots or whatever bird related things people discuss tends to stay in the bubble of bird people (or bike people, or knitting people, pick any topic and this is probably applicable)! It’s a natural tendency that we have.

This tendency is equally true of conservation, science and research – we do exactly the same. All the cool findings, new data, new ideas get shared and tumbled between researchers and scientists alone. Now very often, these science and research findings lay the foundation for conservation models, and thus become ways in which we manage our environments. Yet with environmental issues being a global problem the question becomes: how do we reach beyond our own platforms and not preach to the choir, but rather reach new and potentially helpful audiences OUTSIDE of the scientific framework?

This is a problem I have puzzled over for many years as a researcher. I so badly want the whole world to know about, and start giving due attention to the smaller less popular species, the “small 5000” as I like to call them. These are the true biological indicators. Insects, spiders, birds, small mammals etc. are so often overlooked, understudied and generally forgotten when we look at conservation management. Frustrated with the stalemate in research I took to guiding, preying on unsuspecting tourists, who came to Africa thinking it was all about the big 5, and sure we would see a lot of the big 5, but between the sightings, I would focus on the small 5000, and this was quite a hit! What I found is that the “normal” nature enthusiast also finds interest in these lesser known species. My platform had changed, from discussing research and science with other researchers and scientists, I was discussing these things with people from totally different worlds and backgrounds, opening both our minds to new ideas, new views and most importantly, fresh perspectives!

Guiding is a platform not only for a researcher to reach a new audience, but it has another very successful application – Citizen Science. This concept has grown a lot in the last few years, and from a researcher/guiding combination, you often have access to a well travelled tourist, a veritable goldmine of research information. Who may have been to Africa a few times before, may have seen some cool species on a previous trip, and would be only too eager to show you the photos, and probably even scratch out the details of when and where they saw them for you! And just like that your field of study is infinitely enlarged.

Finally, as a researcher who is NOT guiding guests, but operating in an environment with potentially dangerous animals, a guiding background is very good as it sharpens your sense of awareness in the bush, and often looking after a group of tourists in the bush, is not very different from managing a bunch of assistant researchers or volunteers! Guiding qualifications are now at a good standard, and a great “extra” to have as a researcher, even if you are not actively guiding.

So despite a researcher’s natural misgivings my experiment with the guiding world turned out better than I could have hoped and I highly recommend all budding researcher’s out there to take the same plunge!

With this in mind, Bushwise has just launched a new program specific to this. The Scientific Field Research Techniques course takes place in 4, 8 or 12 week durations, and is of particular relevance to students wishing to gain practical exposure and experience in the field, as well as to develop the necessary ‘on the ground’ skills in order to become a more well-rounded wildlife field researcher in the conservation industry. For more information click here – FGASA Field Guiding and Conservation Careers Internship

Blog and photos by Vaughan Jessnitz

BY: Sarah Bennett Camp manager blogs are written by our current students who each get a ...
As any Field Guide will tell you, being a successful guide does not only entail ...
BY: Taya Maasch, student 2021 At the start of the second week, I was assigned the ...