Careers in the wildlife industry

Wildlife jobs in Southern Africa – such as game ranger jobs, field guide jobs, trails guide jobs, and nature conservation jobs – are in high demand. If you want to promote and protect wildlife and habitats, then you’re well-suited for a career in this industry.

We also offer a job guarantee for South African students within six months of graduating from our Bushwise Professional Field Guide course.

After you graduate from a Bushwise course, you could become a: field guide/safari guide/nature guide, trails guide, game ranger, park ranger, game warden, ecologist, and conservationist. There is often confusion between some of these jobs, and many of them overlap. But there are some important distinctions as well, which we’ve discussed on each linked career page. 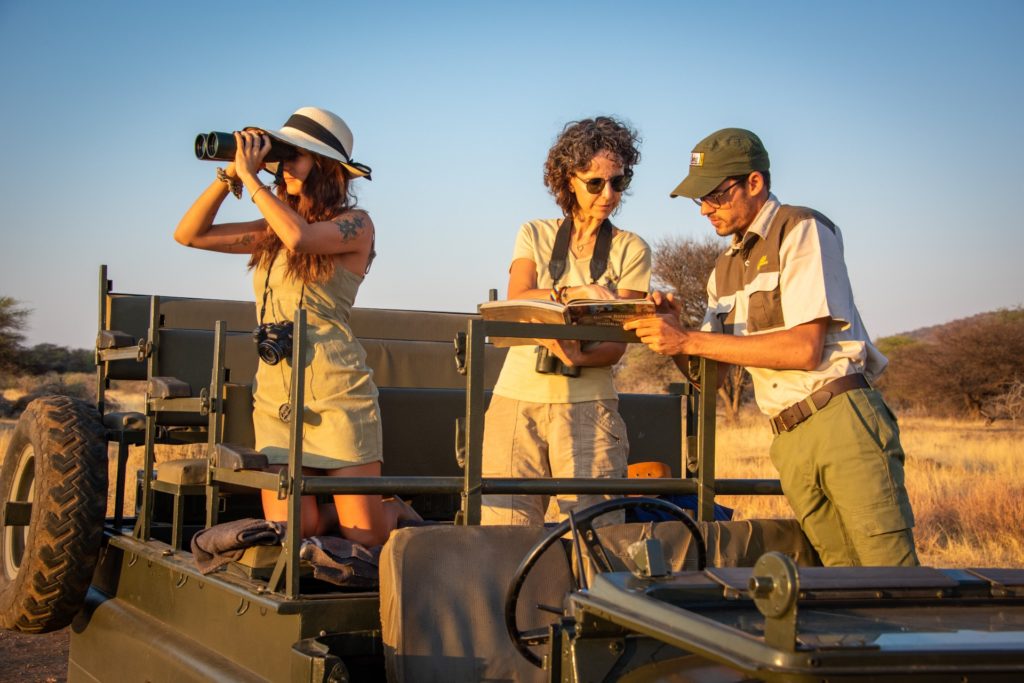 Safari guides are ambassadors of the natural world, serving as the first point of contact between tourists and wild spaces by sharing their nature knowledge with guests on guided experiences. A safari guide job is right for you if you’re passionate about wildlife, you love learning about the natural world, and you’re comfortable hosting and interacting with all kinds of people. A trails guide is distinguished from a field guide (or safari guide) by their ability to guide guests on foot in areas with dangerous game but they may also be on horseback or bicycle. Trails guides interact with guests, just like field guides, but require additional training and certification. If you enjoy walking in nature, observing wildlife and hosting guests, then a trails guide job might be right for you. 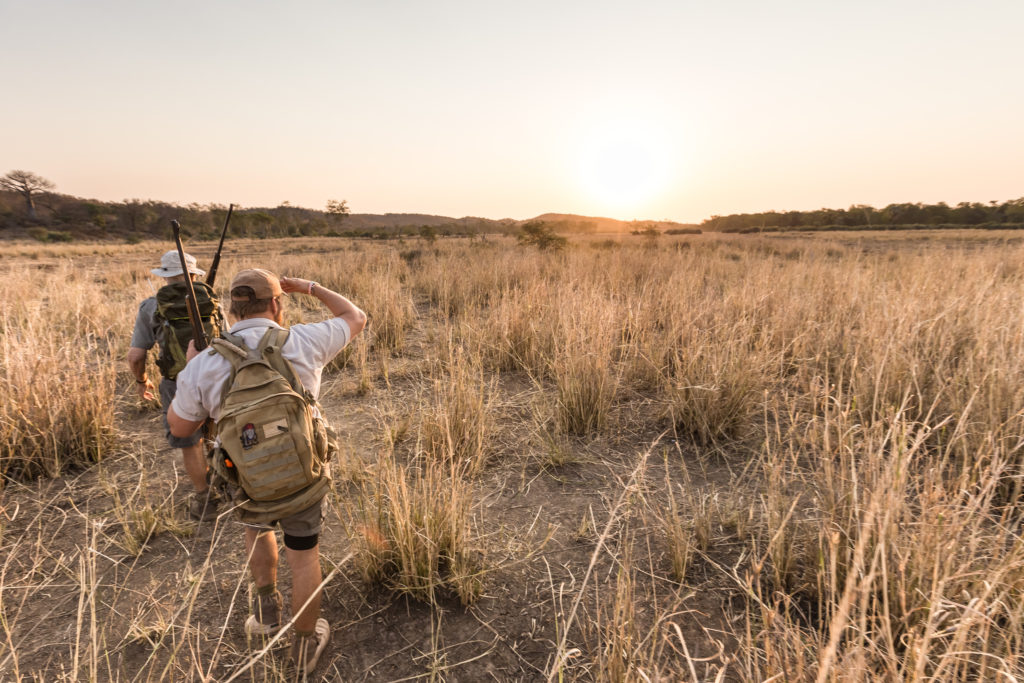 Game rangers are actively involved in conservation and game management. They work in a reserve to ensure rules are enforced, animals are protected and habitats are secure. Similar to safari rangers, they are the “boots on the ground” of conservation. This is a highly demanding and specialised job, and responsibilities will differ depending on where the game ranger is based. On this page, we will give insight into jobs you might find abroad after completing a Bushwise course, for example park ranger jobs, wildlife guide jobs and tour guide jobs to name a few. There is a common thread that runs through these roles and safari guiding: a foundational interest in nature, an appreciation for conservation and wildlife, and knowledge of the way ecosystems work. When you think of working with animals as a career option, what kinds of jobs come to mind? You might initially think of zoos, veterinary clinics, farms or animal shelters. These are certainly some of the more commonly known and popular jobs involving animals, but the list is much larger than this! On this page, we discuss ways to turn your passion for animals into a career.

We know that Bushwise students bring with them a diversity of backgrounds, experiences and goals for the future. Not everyone will go straight into a traditional field guide role after graduation. Some will of course, but for the others there are endless options available.

Some students join Bushwise as a “gap year” alternative. If you’ve just graduated, a Bushwise field guide course can also be a way to gain valuable skills and knowledge that transfer to a job back home. In the USA, for example, there are world-class national parks that are always looking for top-brass talent to join their teams. Positions might include park rangers, tour guides, naturalists, wildlife guides and more.

Some Bushwise students use our courses as an opportunity to learn more about wildlife and further their knowledge as lifelong nature enthusiasts. Because we assist with study visas, you can join a Bushwise course for six months or a year, become a certified field guide and then decide where your path will take you. There are also many volunteer opportunities for international students, which the Bushwise staff can help you find.

If you’re coming to a Bushwise course from abroad, you might wonder: what career paths are available for me? Many international Bushwise alumni are working in South Africa, throughout Africa and further abroad in field guide, nature guide, park ranger and other related jobs. Career options for you are endless; we’ve compiled a list of some of the possibilities here.

If you’re thinking of a career in conservation, travel or wildlife photography, or you want to become a park ranger, tour guide or field guide, you aren’t alone! Bushwise alumni from all over the world have finished our courses and gone on to exciting careers. Here are a few wildlife job paths of our international graduates:

Terianne, from the UK, joined Bushwise in 2010. After finishing she went back to the UK and worked for the Royal Society for the Protection of Birds.

Tess, finished with Bushwise in 2011 and went home to Australia to work in bush regeneration in wild habitats.

Sophie, who is from Switzerland, joined Bushwise in 2011. She volunteered at a reserve in Botswana and then worked as conservation manager in Nepal.

Daniel from the UK ran his own photography company and managed a wildlife concession in Botswana after Bushwise in 2013.

Francesca is from the UK, after Bushwise in 2013 she worked on a research project with the Convention on International Trade in Endangered Species (CITES).

Anna-Marie graduated from Bushwise in 2013 and went back to Australia to work on wildlife documentaries and at a travel company back home.

After completing his Bushwise course, Michael returned to the UK in 2016 to finish his degree in Environmental Management, and went on to manage a lodge in Botswana.

Charl and Eric, both from Germany, completed a Bushwise course in 2016 and then got to work as guides for TARUK international in Germany, which is focused on African travel.

Nathan joined Bushwise from the UK in 2017, afterwards he went on to conduct elephant research in Malawi.

Ellie graduated in 2018 and returned to the USA to work in wildlife rescue.

Mark, who is from the Netherlands, finished with Bushwise in 2018 and worked in South Africa before continuing on as a wildlife photographer throughout Europe and Africa.

Experience is defined as “an event that leaves a

December already, can you believe it?! While you m

Our Bushwise campus Open Day was a huge success! T

What is the most immersive natural experience you

We're well into our summer months now and the rece

We're all about helping you achieve your wildest c

Tomorrow we're going to help you realise your wild

Catch up with Flora's field guiding journey in our

We're just 10 days away from our first ever in-per

Our campus cat is back with one of her growing cub

Never in your wildest dreams could you imagine wor

There's nothing quite like the experience of a lar

Experience is defined as “an event that leaves a

December already, can you believe it?! While you m

Our Bushwise campus Open Day was a huge success! T

What is the most immersive natural experience you

We're well into our summer months now and the rece

We're all about helping you achieve your wildest c

Tomorrow we're going to help you realise your wild

Catch up with Flora's field guiding journey in our