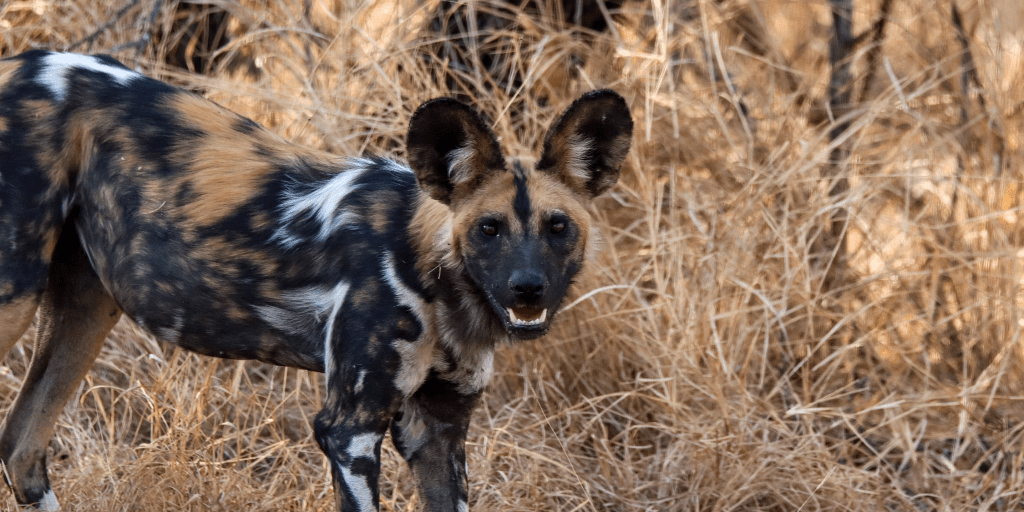 What African wild dog facts do you know besides that they’re from Africa? Well, now’s your chance to get clued up on these stalwarts of the savannah before heading off on your professional field guide course.

There are tons of facts about this species that’ll make you want to take a closer look. For example, African wild dogs are the biggest wild dog species on the continent and the second-most endangered.

Let’s find out more by taking a look at some interesting facts about African wild dogs.

1) They’re quite different from domestic dogs Not all wild dogs in Africa are easy to tell apart from domesticated dogs. But here are some African wild dog features that set them apart:

And these differences don’t just end at appearance. This type of wild dog in Africa isn’t able to interbreed with any domestic dog species. Also, these wild African dogs are so dependent on their habitats and social structures that no one has been able to tame this species.

2) Their coat colour differs according to where they live While African wild dogs across the continent have similarly coloured faces and tails, coat patterns differ from one wild dog to the next. This makes it easier for conservationists to keep track of individuals within a group while collecting data.

But, scientists have also seen that these wild African dogs’ coat patterns vary according to the region in Africa where they live. African wild dogs have distinct eastern-African or southern-African coat patterns.

Eastern-African wild dogs of this species live in countries like Ethiopia, Kenya, Sudan and Tanzania and their coat patterns have more black colouring, with smaller patches of white and yellow fur.

These differences in coat patterns allow African wild dogs in different regions to blend in with the vegetation in their natural habitats. But they also go by a number of other names including:

4) They’re some of the savannah’s most social animals African wild dogs are thought to be the most efficient hunters in the world and this has to do with their strong social bonds.

These wild African dogs run in packs of 15 to 40 members, but packs of up to 100 individuals have also been documented!

Instead, they’ve been seen to take turns caring for their sick and ensuring that African wild dog pups get first pick of any food. In some cases, researchers have even spotted adult African wild dogs offering food to nursing mothers and seen a type of voting practised among the pack where individuals sneeze to cast their vote!

Their highly social behaviour makes them a species of wild African dog that are great at communicating.

They easily outrun prey like wildebeests and warthogs and are known to use teamwork to take on prey like speedy gazelles and prickly porcupines.

5) Why is the African wild dog endangered? Despite their hunting prowess and social spunk, African wild dogs are one of the world’s most endangered animals and the second-most endangered carnivore in Africa.

And, the International Union for Conservation of Nature’s Red List of Threatened Species is where we’ve found the most concerning facts about African wild dogs. There are just 1,409 African wild dogs left in the wild and their numbers are decreasing every year.

The biggest challenges to the African wild dog population are:

Because this type of wild African dog is nomadic by nature, they need large spaces with open travel routes to ensure their survival.

With the negative impact of global warming and human activity on African wild dog habitats, this is becoming even more of a challenge for these wild dogs in Africa.

Take a look at Bushwise’s in-country or online courses where you can learn lots more African wild dog facts and get stuck into making a positive impact in these creature’s conservation.

By: Andi Dill, Bushwise student 2020 Having just finished a long, arduous but very rewarding week ...
Quality of life A field guide will never be rich in the financial sense of the ...
An American takes on a manual transmission. Uprooting your life and moving nearly 10,000 miles from ...