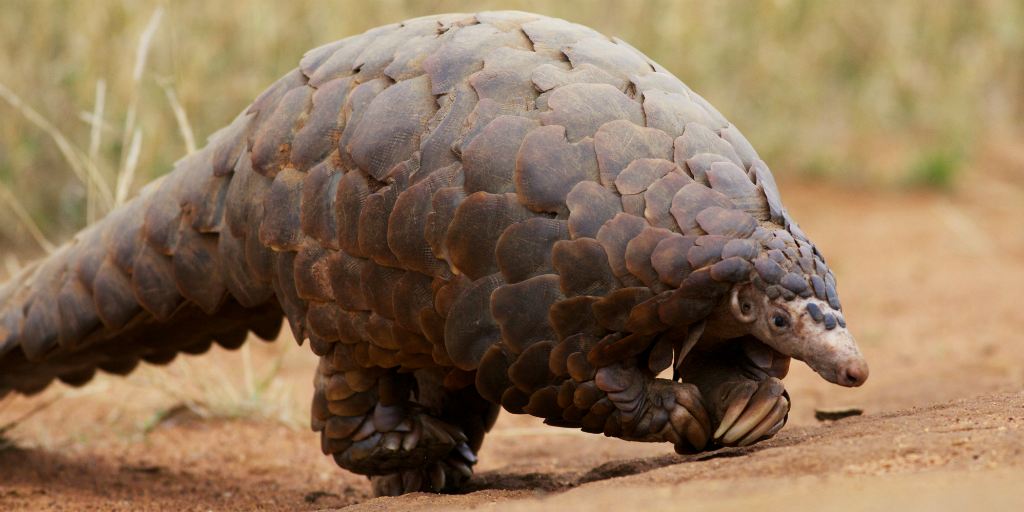 The plight of the pangolin: the world’s most trafficked mammal

Original photo: “Scaly Anteater” by David Brossard is licensed under CC BY 2.0

With World Pangolin Day fast approaching and the introduction of the ground-breaking documentary “Eye of the Pangolin” to various airlines’ flight entertainment options, we’re spreading the word about the endangered guardian of the forests – the pangolin.

They’re mostly known for not being known, so why should you even care about the pangolin?

The pangolin is said to be the most trafficked mammal ever, with over a million pangolins poached in the last ten years, leaving them at risk of extinction. The extinction of pangolins could cause both ecological and economic loss to local communities.

What is a pangolin? It may look like a reptile, but a pangolin is actually a small mammal covered head-to-tail in 70 to 1,000 tough, overlapping scales made of keratin. There are eight different species of pangolins which have populated Asia and Africa since dinosaurs walked the earth.

Equipped with a tongue longer than its body, the pangolin makes use of this sticky weapon to feed on ants and termites.

The pangolin is the only known mammal with scales. These scales make up around 20% of the pangolin’s total body mass and are used as their main form of self-defence.  Pangolins curl into a tight ball when feeling threatened, so that their entire body is protected from predators by the layers of scales.

Why are they important? Original photo: “Pangolin” by Adam Tusk is licensed under CC BY 2.0

Not many people know what a pangolin is, let alone the impact they have in society.

The pangolin is a keystone species, which basically means they are critical to the survival of other creatures or ecosystems.

Pangolins play an important role in regulating insect populations, with a single pangolin consuming around 70 million ants and termites each year.

The possible disappearance of these scaly mammals is expected to have a massive impact and knock-on effect on the environment and ecosystems around them.

For example, the extinction of pangolins could have negative effects on the economy. This is because pangolins eat termites that would otherwise destroy local homes and crops that provide communities with their income.

According to Simon Stuart – chair of the International Union for Conservation of Nature (IUCN) species survival commission – pangolins save the planet millions of dollars a year in pest destruction.

Why are they poached? The only predator that leaves pangolins absolutely defenceless?

These scaly anteaters are most commonly poached by humans for their scales.

Pangolin scales are collected, crushed into a powder and used in traditional medicines for the treatment of arthritis, lactation, convulsions and stomach disorders, to name a few.

Despite this long list of ailments, no scientific evidence has been collected to prove that pangolin scales have helped in the treatment of any of the conditions mentioned.

Pangolin foetuses are also eaten in parts of Asia to demonstrate wealth and high social status.

How can you help? If you’re passionate about the pangolin and want to know how you can help in their conservation, look no further than Bushwise Field Guides.

Bushwise is a top provider of professional field guide training in South Africa. Here, you have the opportunity to really develop your understanding of the bush, conservation, and field-guiding.

This hands-on experience will kick-start your career in conservation by exposing you to the different kinds of skills needed for a career in the bush. For example, at Bushwise you will have the opportunity to learn about what is needed to become a game ranger.

The main role of a game ranger is to manage and look after the resources of game reserves. A game ranger’s job includes anti-poaching duties and teaching others about conservation.

These skills can be used to help in the journey to protect the pangolin from being trafficked and hopefully over time, will lead to a steady increase in pangolin numbers in Africa.

When it comes to the protection of pangolins, there’s no time to waste. Join a Bushwise course today and kickstart your career in conservation.

BY: Daniel Greyvenstein, student 2021 After a weekend of studying, the week kicked off with the ...
Firstly, a big welcome to all the new Field Guide recruits! Everyone arrived safe and sound ...
Tensions were running high on campus as every student prepared for their final FGASA exam, and ...