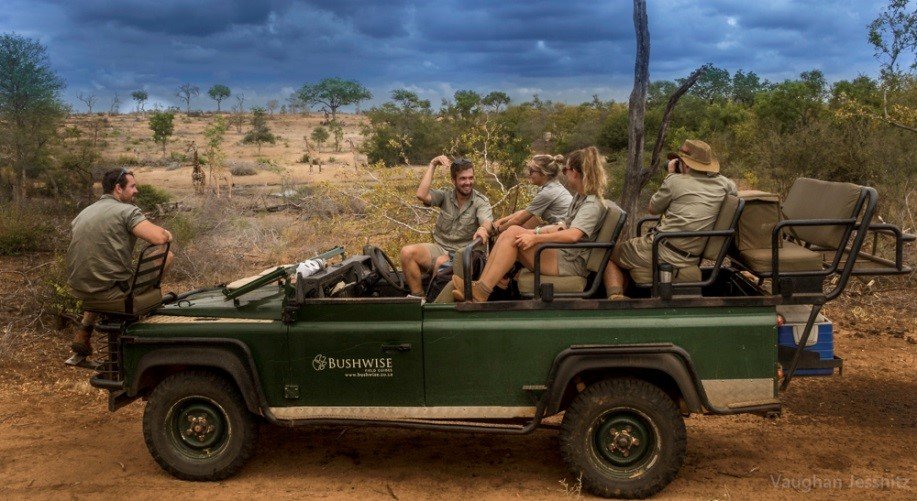 This last week was one which started off with hard work, as the students studied and got to terms with two very dynamic aspects of our region, namely Astronomy and Geology. The classes were entertaining though, as trainers took the students down a virtual exploration, from the depths of the Earth’s crust, to the galaxies and beyond! All this time, the clouds were brewing beyond the distant mountains, and the smell of long awaited rain became ever more present! After some serious studies, the students went on a day’s trip to Kruger, as well as a full day drive on Makalali, where they could start practising the real deal, leading a guided Safari! With the knowledge they have been absorbing over the last weeks, this was the time to brag with what they have learned, and the skills they had developed thus far. The transformation from when they first started the course till now was very rewarding for the trainers, and the students performed amazingly, with us often forgetting that these students have only been with us for two months! sightings have been had on the reserves lately, as we encountered Hyena, Cheetah, Lions and Elephants, along with plenty of general game, and the spaces in between filled with a multitude of birds and other interesting elements of nature! Little did we know though, that we would be treated to the first proper rains of the season this week!

There is certainly something special about the smell of rain after many months of drought, and when the heavens decided to eventually open, everything, including the students rejoiced! This ended in a lot of soaked, muddy, but most importantly happy students, who have come to appreciate the importance and necessity of rain! A lot of white Bushwise T-shirts, will never be the same again, but none the less, a special moment among the team! The following morning we headed off on drive, and witnessed quite a fascinating occurrence as the Makutsi River started flowing again! We spent most of the morning watching the water creeping along the dry sand, slowly at first as it soaked in, then speeding up and covering ground, greeting the parched dry river sand section by section, bubbling along. Some students made a few little sand sculptures as they waited, whilst others had fun trying to catch the first eager catfish (Barbel) that were swimming in the pools, which only moments back did not have any water!

The week ended off with exams as usual, as they knowledge passed down during the week was tested. Most of the students did exceptionally well, and are eagerly awaiting the upcoming week where we continue with the assessment safari drives and add more to their experiences which they will need to become great field guides! Some images in this article were taken pre-COVID-19. BY: Francois Theron This blog was written by ...
Writing and photos by Annie DuPre, Bushwise Copywriter, currently pursuing her master’s in conservation studying African ...
BY: Tasneem Johnson-Dollie Which African elephant facts are the most important when it comes to their ...