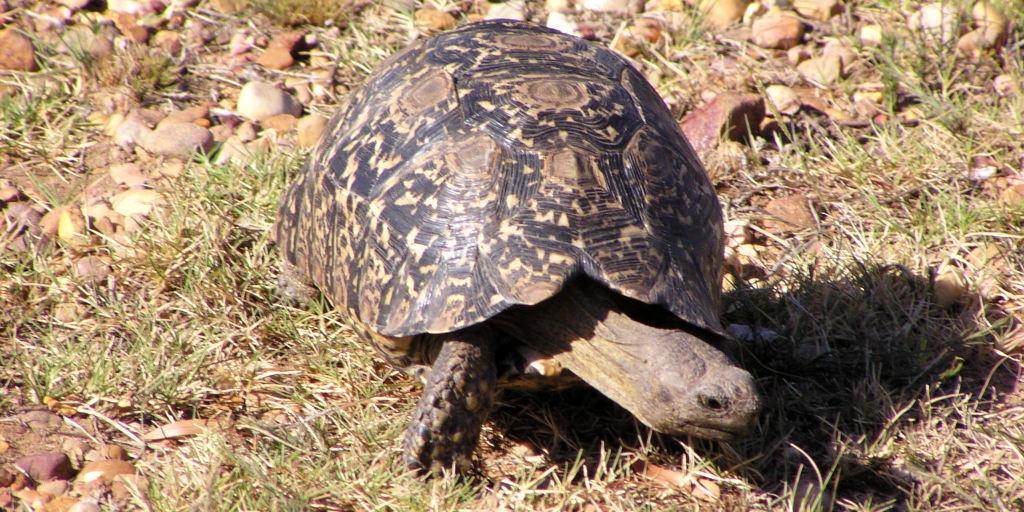 Terrific facts about the different types of tortoises

There are tons of different types of tortoises on Earth and even more tortoise facts that you can learn to get up to speed on every species!

From how they smell to where they live, tortoises aren’t as plain and simple as you may think.

Here are some facts about tortoises that’ll get you clued up on one of Earth’s oldest animals.

What is a tortoise?

Tortoises are land-dwelling reptiles that belong to the family Testudinidae.

They’re most easily identified by the shells wrapped around their bodies and the scaly skin they sport that’s seen on all reptiles. The different types of tortoises vary in size and colour and some of the most obvious differences can be seen in their shells – called carapaces. The smallest tortoise carapaces measure in at lengths of less than 12 centimetres while the largest can be over one metre long.

And, different types of tortoises have shells that look quite different too. Each tortoise shell is made up of segments called scutes, and these are pieced together to form shell patterns. Some tortoise species – like the speckled Cape tortoise – have subtly patterned shells coloured with smudges of brown, grey and yellow. Others – like the Indian star tortoise – boast shells with geometric patterns that really stand out.

Most tortoises are herbivores with diets consisting of grasses, sedges, flowers, succulents and fruits. But one species, known as the red-footed tortoise, also occasionally feeds on carrion – the decaying flesh of dead animals.

How many tortoise species are there?

There are over 40 different tortoise species found in nature.

Here are some interesting tortoise facts about the different tortoise species: And where exactly can you go to see all these different types of tortoises and more? Well, here’s a look at where tortoises live.

Where do tortoises live?

You’ll find tortoise species on every continent except for Australia and Antarctica.

The largest tortoise population lives in the southernmost region of Africa. In fact, the Cape region of South Africa is home to the richest biodiversity of tortoises in the world.

You could visit any number of habitats across the world and come across a tortoise, but most tortoises prefer semiarid environments. Deserts, grasslands, mountainous regions, scrub forests and sand dunes are some of the most well-known tortoise habitats. What’s the difference between turtles and tortoises?

Turtles and tortoises come from the same evolutionary line, which is not surprising since these creatures have many similarities.

For instance, both turtles and tortoises are reptiles with shells, and both lay their eggs on land.

The main differences between turtles and tortoises lies in the adaptations they have that allow them to live either on land or in water.

Here are some key differences between turtles and tortoises: Original image: “Slow vs Slower” by Sarz.K is licensed under CC BY 2.0

The most terrific facts about tortoises

So, you may think you know a lot about the different types of tortoises after everything you’ve read. But, prepare to be surprised.

Are you keen to learn even more facts about tortoises? How about travelling to where tortoises live to learn about them first-hand in their natural environments? You can make these dreams a reality by signing up for a Bushwise Field Guides online or in-country field guiding course. This way you can fast-track your learning and get to know more about tortoises and other animals that live in tortoise habitats.

Find out more about the Bushwise courses that you can do online or on the ground and see how you can learn top tortoise facts first-hand.

BY: Tasneem Johnson-Dollie World Habitat Day, held on 5 October every year, places emphasis on human ...
BY: Benno Klinck, Bushwise student 2020 Who could have guessed that this year would go the ...
BY: Frederico Odierna, student 2021 My experience of Bushwise has been nothing short of amazing and ...