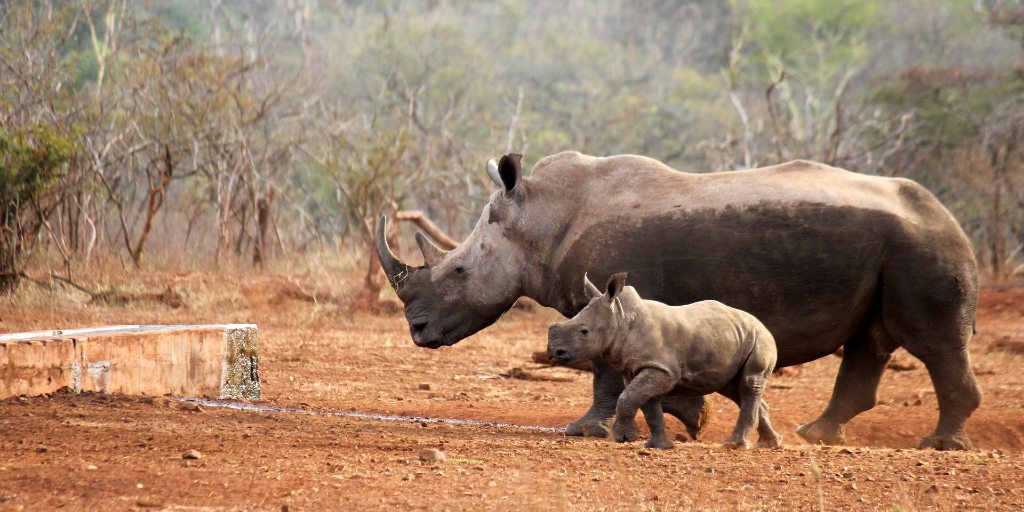 Can you name ten interesting rhino facts that don’t have to do with rhino species’ endangered statuses? Well, we’ve got you covered.

Rhinos have been in the spotlight for years because of their declining numbers and vulnerability to poaching.

But we’re starting to see some rhino population numbers rising, and there are lots of interesting facts about rhinos that can help you get to know more about these creatures, and even inspire you to get involved in working with them.

Here are ten rhino facts that make rhinos fascinating in our book. The five rhino species are found across Africa and Asia, and rhino habitats include deserts, grasslands, savannah, shrublands and forests.

2) Black and white rhinos are the same colour Both black and white rhino species are a very similar colour – their skin is steely gray.

On closer inspection, you’ll also see that the white rhino species has a longer skull and a less-defined forehead.

3) They have interesting (and hilarious) ways of communicating

We’ve all heard about animals using noises or smells to communicate with each other. But one of the most interesting facts about rhinos is that these creatures put a humorous spin on their methods of communication.

Rhinos mainly use honking, sneezing and pooping as means of communication.

They’ll make different noises depending on their mood. For example, a relaxed rhino will honk; an angry rhino will snort, growl or make a trumpet-like noise; a scared rhino will scream; and a rhino wanting to warn others of danger will sneeze loudly.

Scientists are also finding out more and more about how rhinos communicate through their poop. Studies on rhino dung in South Africa have shown that different dung piles contain different chemicals, and the smells these chemicals give off are in fact a message for other rhinos. Rhinos have very poor eyesight. How bad is it? Well, it’s said that a rhino can’t see a motionless human standing 30 metres away from it.

Imagine how difficult this makes it to find food, stay with its herd, or defend itself.

The good news is rhinos have strongly-developed senses of smell and hearing, which makes moving around so much easier. In fact, because they rely so heavily on their sense of smell, the largest part of a rhino’s brain is dedicated to it.

5) Rhinos are the second-largest land mammals in the world

After elephants, rhinos are the second-largest land mammals on Earth. And this rhino fact is made so much more impressive when you consider that all their bulk comes from eating vegetation.

Carnivores and omnivores get tons of energy from the meat, insects and vegetation they eat, which makes it easier for them to grow large.

But as herbivores, rhinos’ diets (which consist mainly of plants) offer much less energy for growth. This means that rhinos need to eat tons of plant material every day to achieve the growth that they do, and rhino habitats are miraculously able to provide all the plant matter that rhino species need. 6) What’s a group of rhinos called?

Of all the interesting rhino facts you’ll learn, this may be the most satisfying. A group of rhinos is called a crash!

Many species of rhino live solitary lives, but they will sometimes form groups. For instance, female rhinos may form crashes with their young and other female-offspring groups while they’re raising their young.

7) Despite their size, rhinos are speed machines

Don’t let their poor vision and bulky build fool you. If you happen to be in a rhino habitat, you best be wearing your running shoes.

Rhinos are speed machines that can run at over 60 kilometres per hour. And, it’s not just their speed that’s impressive, they also accelerate at a neck-breaking pace. Rhinos can reach their top speed within just a few strides!

Because of their acceleration and speed, rhinos are faster than both elephants and hippos, and are considered the fastest of all the land mammals weighing over 1,000 kilograms. Yes, it’s a rhino fact, all species of rhino are actually capable of swimming! But, the Asian rhino is much better at swimming than its African cousin.

The greater one-horned rhino is perhaps the best swimmer of all rhino species.

Asian rhino species can cross bodies of water with ease, dive into water and even feed underwater.

Woolly rhinos are an ancient rhino species known to have lived in the Ice Age around 2.4 million years ago.

Woolly rhinos earned their name because researchers noted their hairy (or woolly) skin as being one of the most distinctive features after examining the remains of this extinct species of rhino.

Sumatran rhinos are the only rhino species alive today that are also covered in hair and they’re considered the extinct woolly rhino’s closest living relative. 10) Why are rhinos important?

Rhinos are some of the largest animals found in wild ecosystems, and rhino habitats include an array of natural spaces – from deserts and subtropical grasslands, to tropical forests and shrublands.

This means rhinos can have a huge impact on the ecosystems they live in.

Because of this, rhinos are considered keystone species – a species whose presence in an ecosystem plays a major role in maintaining that ecosystem.

As a megaherbivore – a large herbivore that eats significant amounts of vegetation – rhino species are capable of shaping the natural environments they live in. This adds to the well-being of the plants and animals in these environments. How? With all these interesting rhino facts laid out, it’s clear to see that there’s so much to learn about rhino species.

But, despite their spunk and silliness, conservation-related rhino facts are still the most frequently cited. Why is this?

Well, many rhino conservation organisations have contributed to the well-being of rhinos in a big way, and some species of rhino have a much better conservation status now than they did ten years ago.

However, population numbers for some of the Asian rhino species, as well as the northern white rhino subspecies, haven’t seen as much progress.

Here are some rhino conservation statistics according to the International Union for the Conservation of Nature (IUCN):

So, now that you’ve learned interesting facts about rhinos, are you inspired to get involved in conservation activities aimed at their well-being? This image was taken pre-Covid-19.

How you can learn more about rhino conservation

By adding to your knowledge about rhino species, rhino habitats and rhino conservation, you can build on your own understanding of the challenges facing these creatures and add to the awareness of those around you.

Bushwise Field Guides offers courses where you can learn more about rhinos online or in a rhino habitat in Africa.

Find out more about our in-country courses and internships, or browse our

Photo by: Zlicke Slabber BY: Ryan Mengel  This blog was written by one of our trainers, ...
By: Zarina Cooper During my first week as being camp manager, I read a quote that ...
Picking up from the last blog, we get to the next..... Anton from Manyeleti Game Reserve ...