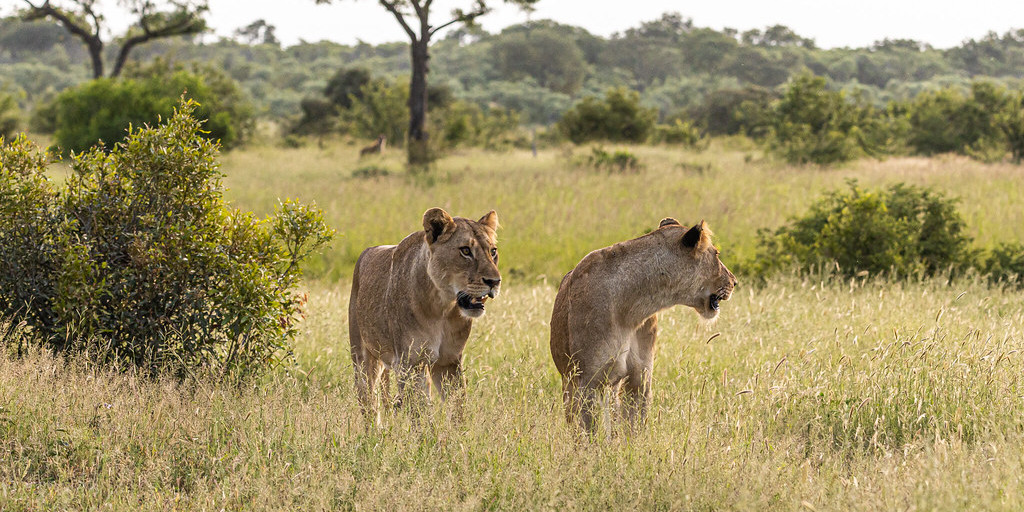 The age old adage of dogs chasing cats is something that extends as far back as our own genetic and ancestral memories. But what about cats chasing dogs – which in natural African landscapes, is a far more likely occurrence? Several weeks ago we were treated to an unbelievable sighting of the Birmingham Pride lions sneaking up on and chasing a large pack of wild dogs on the Southern African Wildlife College campus. Our hearts were in our throats and adrenaline coursed through us (and the animals) as the sighting unfolded! Fortunately, both the canines and felines went their separate ways, unscathed. But this is not always the case and often begs the question: “Why?”

Some may say, “oh, that’s just their instinct,” and leave it at that – as though instinct is some mysterious force that we as humans don’t quite understand. But this type of conflict and competition between predators goes deeper and is far more complex than just “instinct.” To understand why cats chase dogs, dogs chase cats, jackals chase vultures, and vultures chase marabou storks, we need to take a closer look at the environments they inhabit and what resources within that environment they all need to compete for.

Resource competition is just one explanation for interspecies competition – and it’s the one we’re going to explore today. On a Bushwise Professional Field Guide Course, you can learn about many other types of competition and ways predators interact, tolerate and avoid each other.

Within any ecosystem there is a trophic pyramid that details the exchange of energy between species and the niches they fill. Producers, like plants, are found at the bottom and are able to create their own food.

Next comes primary consumers. These are animals including zebras, wildebeest, and impalas, who eat plants to fulfil their nutritional needs. After that come the secondary, tertiary and apex consumers: omnivores and carnivores that eat other animals for their energy and nutritional requirements. This is where the action really heats up. Although adapted for different hunting techniques, predators like lions and wild dogs will still compete for some of the same resources. Because lions are much larger than wild dogs, they don’t always target the same prey species – but they can (for example, both species eat impala and wildebeest) – meaning they can compete for the same food source in the same area.

If, for example, the lions are successful in killing an impala, local wild dogs would have to travel further and spend more energy searching for food.

Ultimately, if the lions can chase away or potentially kill a competitor (such as a hyena or wild dog) then they don’t need to work as hard, expending valuable energy, in search of good hunting. Why waste energy moving to a different location when the lions could just as easily push their competitors to a different area? This cycle of conflict is as old as time and plays an important role in balancing the scales of any natural environment. And it’s not only seen among terrestrial predators. Scavenging birds like vultures and marabou storks not only compete against each other, but also with other scavenging species like jackals and hyenas (although hyenas are exceptionally good hunters in their own right).

Maybe interspecies competition for resources can be boiled down to something as simple as instinct. But leaving it at that doesn’t do justice to the extremely complex natural systems that have developed over millennia to ensure the healthy balance of natural systems.

Would you like to learn more about interspecies competition, and see Africa’s predators for yourself? Apply today and pretty soon you’ll be training in the Lowveld.

This blog was written by Darryn, one of the Bushwise trainers. Here, Darryn reflects on his ...
Vaughan's stories continue: This was not the only encounter I enjoyed with Sam, there are too ...
To become a guide, no less a female guide. You need to have a sense of ...