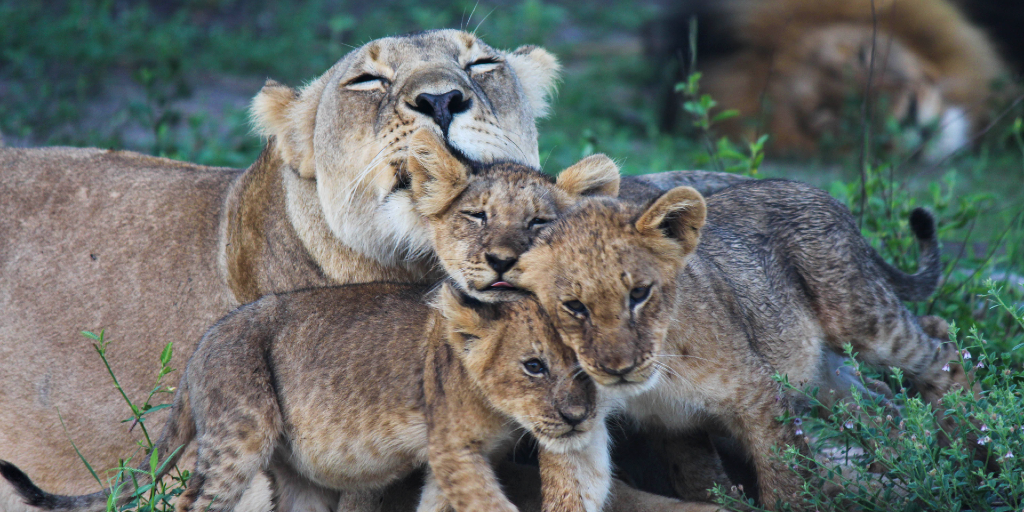 World Lion Day – celebrated annually on 10 August – is all about lion conservation and getting the word out with interesting facts about lions.

You’ve seen lions in movies, maybe had a stuffed toy lion as a kid, or even got a glimpse of lions in their natural habitats while on a safari. But, don’t think that you know all there is to know about these seemingly familiar creatures, unless you’re a graduate of a Bushwise course, that is.

Here are some interesting lion facts and more information on World Lion Day that may teach you some things you never knew about this species of big cat. 1) Why are lions considered the king of beasts?

Lions are some of the strongest and most courageous of all big cats, but there are big cat species that are even bigger and fiercer – like the Siberian tiger.

So, why is it that lions are known as kings of the beasts then?

Well, this may have to do with the fact that lions are the most sociable of all big cat species. They live in prides of up to 40 members and, because there’s safety in numbers, they’re not as quick to slink away at the first signs of danger.

So, while big cats like tigers, leopards and jaguars may duck into the undergrowth when they hear a safari vehicle approaching, lions may continue to lounge out in the open.

This means that human beings have encountered lions much more than they have encountered other powerful animal species. And this has made lions a popular talking point throughout the ages and built up their status amongst storytellers as the king of the beasts.

So, remember to share this piece of information with your guests when you’re leading a safari and you spot a pride of lions in the bush.

2) How many different types of lion species are there? There’s only one species of lion alive today, and its scientific name is Panthera leo. There are, however, two different types of lions within this species. These subspecies are known as African lions and Asian lions.

You may jump right to “lion cub” when asked what a baby lion is called, but there are even more specific ways to address these feisty furballs.

Baby lions are in fact called whelps or lionets.

4) Lions start off with spots

Little lions often have rosettes or spots of brown spread out across their tawny coloured coats. These markings tend to fade as they grow up, resulting in the single-coloured coats seen on adult lions. 5) Lions can get water from plants and meat

Both African and Asian lions live in terrains that can sometimes run short of water.

So, it’s a good thing that lions can meet their water requirements in other ways. How exactly do they do this?

Well, lions’ bodies are highly adapted to surviving when water isn’t easy to come by. For example, their bodies can make very efficient use of the water that’s part of the meat they eat.

Some lions, like those living in the Kalahari Desert, have also been known to drink from vegetation like tsamma melons when they can’t gain access to water. This isn’t commonly seen in big cat species.

These adaptations make it possible for lions to go for up to four days without drinking water.

However, if water is available, lions will drink every day. 6) You may spot a lion hunting in a storm

Lions prefer to do their hunting at times when they’ll have the biggest advantage over their prey.

Because of this, lions will often hunt at night. Cooler night-time temperatures make it easier for lions to perform at their peak, and the darkness, paired with lions’ above-average night vision, gives them the advantage they need to land a kill.

For similar reasons, lions have also been spotted hunting during storms.

The noise that comes with storms may make it harder for other animals to hear who’s coming. But, lions have a sharp sense of hearing that can cut through the background noise.

Add to this the fact that lions can see well even when a storm makes visibility poor, and you can see why hunting in a storm is something lions don’t often shy away from. 7) Lions are the only big cat species that roar together

Many big cat species can roar, but lions are the only ones that opt to roar in a groupwise fashion in certain circumstances. Why?

Well, their highly social behaviour means that they do lots of different things together, and roaring is one of them. And, because the most common reason why lions roar together is to defend their territory, more lions make for an even more powerful message to intruders.

Female lions often raise their cubs together. In fact, lion cubs will feed from any female within their pride that is producing milk. And, watching out for each other’s cubs is second nature for mother lions.

So, how many of these facts didn’t you know? If you’re feeling inspired to get involved in lion conservation, let’s talk more about World Lion Day and what you can do as a field guide. They’re celebrated wildlife conservationists, filmmakers, National Geographic Explorers-in-Residence and researchers with over 30 years of experience working in the African wild.

Derek and Beverly have Africa’s large predators at the heart of their work, and the challenges faced by lions across the world was what inspired them to start up World Lion Day.

You see, as well-known as lions may be, many people were unaware of the declining lion population and the factors affecting the well-being of African and Asian lions alike. World Lion Day made highlighting the conservation status of lions a worldwide affair. Why is World Lion Day important?

The International Union for Conservation of Nature’s (IUCN’s) Red List of Threatened Species categorises African lions as vulnerable, and research has shown that three-quarters of the African lion population is in decline.

And, Asian lions are facing even bigger challenges. The Asian lion population is made up of just one group of 674 individuals living in India’s Gir National Park.

These statistics make it clear why lion conservation in Africa and Asia should be key concerns for wildlife conservationists.

World Lion Day is an important part of highlighting the challenges faced by lions across the world, celebrating the lion conservation efforts that are taking place and encouraging everyone to add to lion conservation in their own way. How you can prepare for World Lion Day this year

Learning as many interesting facts about lions as you can means that you’ll be growing your understanding of these wild animals. It’ll also add to your ability to advocate for lion conservation wherever you are.

And, you can boost your wildlife education by signing up for an online or in-country course or internship with Bushwise Field Guides.

These programs make it easy to learn from experts in the field and even allow you to go to where the lions are and add to reserve management efforts among a large lion population in Africa.

Take a look at our online and in-country field guiding courses and pick how you want to prepare for World Lion Day this year.

It is a very daunting task that lies ahead of everyone at Bushwise. Nonetheless, it is ...
Feature photo by: Benno Klinck BY: Kim van Greunen, Bushwise Sales Manager Before we go into the ...
Lately it has all been about practicing for our mock game drives, which will eventually lead ...