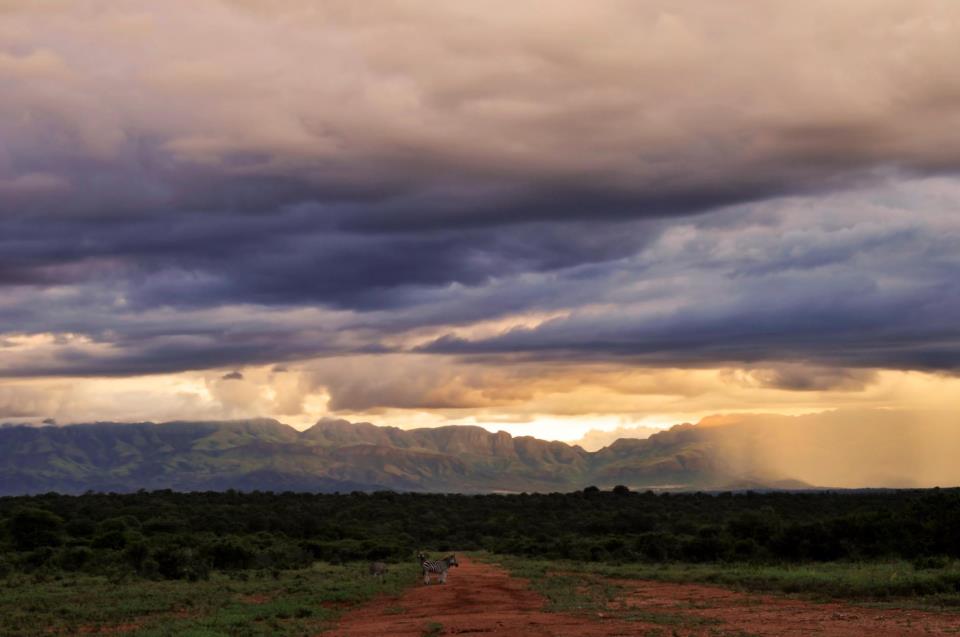 The Impact of Drought & Rain cycles in the Lowveld

Location of the Lowveld

The Lowveld is an area that lies within two provinces of South Africa, Limpopo and Mpumalanga provinces. It is called the Lowveld due to its low altitude in the north eastern tip of South Africa. The altitudes range from around 300-600m above sea level. The local weather system yields a subtropical climate with hot, humid summers and mild, dry winters. Day temperatures of above 35° in summer are nothing strange to the local inhabitants.

The Lowveld is exposed to great variations in the amount of rainfall received in any one year. The reason for the low rainfall in the Lowveld and its variability lie in the position of the region relative to the main weather-generating circulation systems. The latitude of the Central Lowveld coincides with a zone of dry, descending air.

This means lots of sunshine and warm temperatures but only a little rain. It is only when the tropical circulation shifts southwards in the summer months that the high pressure cells can be pushed aside, sucking moist air from over the Indian ocean and sometimes leading to spectacular thunderstorms. October to April is generally regarded as summer months. Research on the rainfall patterns in the Kruger National Park over the last 100 years indicates a cyclical tendency in rainfall volumes, with 10 years of above average rainfall typically followed by ten years of below average precipitation. The average rainfall is around 500mm per annum. Rain usually falls between October and March, with a peak in December and January. On average there are thunderstorms for only 25 days of the year.The past 10 years are regarded by many as one of the most intense droughts experienced in the past 30 years or so. A drought could generally be defined that when an area in South Africa receives less than 75% of its normal rainfall, it is considered to be experiencing a meteorological drought. BUT it can be safely assumed that a shortfall of 20% from normal rainfall will cause crop and water shortfalls in these regions accompanied by social and economic hardship.

HOW THE DROUGHT AND THESE RAINFALL PATTERNS AFFECT THE LOWVELD

Climate acts with geology as a critical determinant of the ecological potential of a landscape. The climate of the Lowveld follows a trend from wetter and cooler weather in the south and west to drier and hotter in the areas of the north and east. These trends cut across the diverse geological belts to provide a wide variety of habitats, accounting for the great variety in the vegetation and wildlife in the region. The wind usually blows from the South, South East, usually under 12.6km/hr. The strongest winds of around 30km/h usually blow in October. From August to October this wind sometimes swings to blow from the north; this is usually a hot dry wind. The consequence of rainfall being confined to six months of the year is that most crops can only be grown during this period. Similarly, the recharging of water resources is also confined to these crucial six months. When the seasonal rainfall is seriously below normal, crop yields are poor and ground and dam water levels fall dangerously low. Should these conditions occur in swift succession, as in the periods from 1964 to 1970, 1991 to 1995 and again from 2002 to 2005, there is insufficient time for natural resources and the economy to recover from each rainfall-deficit period.

The effect of abnormally high temperatures is an increase in evapo transpiration as well as stress on plants whilst further depleting surface-water reserves through evaporation.

A knock for the Agricultural Industry

The most serious impact, other than dwindling water supplies, is the effect on staple crops and, ultimately, commercial crops. In 1992/1993, undoubtedly one of the most widespread droughts of the last 45 years, maize had to be imported to South Africa . The knock-on effect of crop failure could be seen in the population drift from rural areas into the cities, farm labour lay-offs and farm closures as well as an increasing indebtedness in the agricultural sector.

Other serious impacts brought about by drought are the devastating veld fires which destroy large areas of grazing at a time when grass is in short supply. Commercial timber and orchards are also prone to damage at such times. In 1992 there were several huge fires which destroyed thousands of hectares of grassland. In one of the worst events, during August, at least nine people perished. In 1994, a combination of unusually strong winds and very dry conditions saw large areas of grazing and timber destroyed. Six people died in one such fire in July of that year. Again, in July of 2002, Mpumalanga was devastated by fires that destroyed 24,000 ha of pasture and left four people dead and damages amounting to more than R32 million. Soya, sorghum, groundnuts and sunflower crops have also been affected, which has negatively impacted South Africa’s food security. While South Africa usually exports maize South Africa will have to import roughly 5 to 6 million tons of maize (half white and half yellow) to meet its internal demand.

What a delightful sight it is when one sees , smells and feel the first rains after prolonged periods of drought .Not only does it bring the water but a very welcome relieve for especially the farmers and it also creates an elevated spirit amongst the people of the area. Not to even mention the plants and animals!