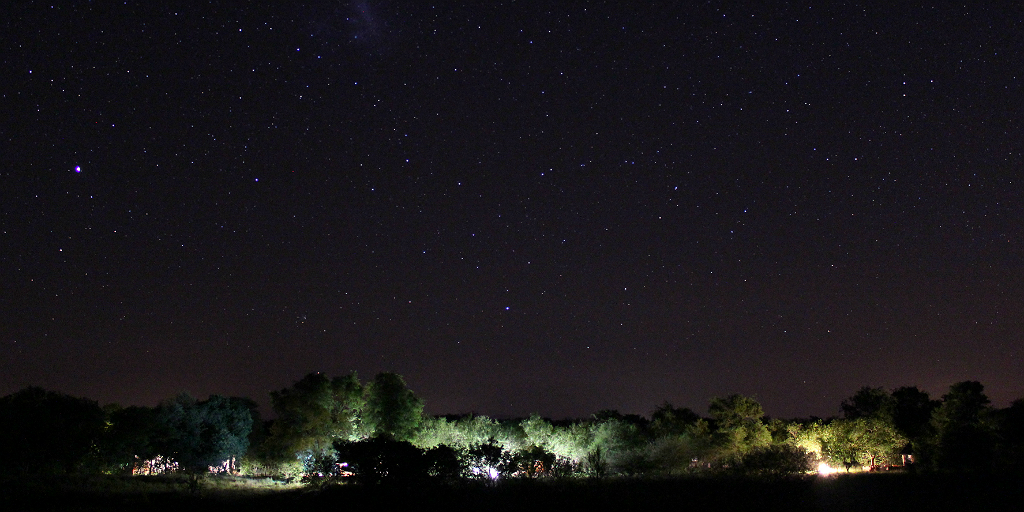 How to navigate using the stars in the savannah

How to navigate using the stars isn’t just something that’s nice to know when living or working in the bush – it’s vital!

Whether you’re learning to become a wildlife researcher or a field guide, your future career will mean living in or visiting remote locations from time to time.

Yes, you’ll probably go out as part of a team, but how can you be sure that you’ll be able to find your way around if you happen to get lost?

One way is to learn how to make use of your surroundings for navigation. Sound like something out of an adventure flick?

Well it doesn’t have to be, because on a Bushwise Field Guides’ course you’ll learn the basic astronomy that will set you off on the right track. Here’s a little taste of what it’s all about. Astronomy is the study of the universe beyond Earth’s atmosphere, including all of the objects that exist in space.

It’s the oldest natural science. But, before the invention of the telescope in the seventeenth century, basic astronomy was focused on predicting the position of the sun, moon and planets.

Today, it’s an out-of-this-world endeavour – literally – and includes the study of objects that we can see with our eyes or a telescope, and those that we can’t!

If you sat in a modern-day astronomy class you’d get to: Most of our understanding of space comes from what we’ve learnt from Earth-bound observations, astronauts who spend small amounts of time in orbit, or probes and robots that are sent to do some interstellar snooping.

Here are just some of the interesting astronomy facts that this field has filled us in on: Luckily, there are around 5,000 stars and 88 constellations – a recognisable pattern of stars – that we can make out in the night sky. This means that navigation by the stars, a practice that has been around since ancient times, is still possible today. Here’s how.

Navigation by the stars

Star navigation can be even easier than using a compass. And some of the most interesting astronomy facts are the ones that allow us to navigate by the stars.

Here are just three star navigation facts to fill you in on how to navigate using stars. You’ll learn more about these facts in a field guide astronomy class. To navigate your way to your destination, you first need to know where you’re at. Basic field guide training will teach you how to keep track of your location as you move from place to place.

This way, you won’t have to try to decipher your location in the dark, and you can get a head start on finding the stars used for navigation.

2) Think of stars as lampposts

As the night creeps on, we can see the stars moving around the sky. But some of them stay in position. These are the stars used for navigation.

Think about the street in the city where you live, lit up by lampposts at the end of every day.

These lampposts light your way, and can even help you see how far you’ve travelled from your initial position once you’re on the move. Polaris (or the North Star) is one of these lamppost stars used for navigation.

Navigation by the stars boils down to pinpointing Polaris in the night sky. To do this, you’ll need to spot a specific group of seven stars known as the Plough, or the Big Dipper.

Locating specific constellations can be tricky at first. Practise makes perfect, and it helps to get in touch with your creative side.

Start off by spotting the Southern Cross,  a constellation of four stars that lights the skies of the southern hemisphere.  This arrangement of stars is also also known as Crux, and can point any traveller in the direction of the south pole.

But how would one use this constellation for star navigation?

Well, with a little imagination, you can link up the pairs of stars in the constellation, and imagine one short and one long line that intersect to make a  cross. Now, focus on that longer line. The distance between the stars that make up this line is what you’ll use to figure out which way south is. How?

Start by holding up your thumb and index finger to measure the distance between the two stars making up the longer  line. From the bottom-most star of the Southern Cross, move four times this distance away from the Southern Cross in a line that extends straight down from the cross itself.

Now, look at the spot on the horizon that lies directly beneath your endpoint. You’ve found south!

Not quite with us? Well, there’s another way to find south using the Southern Cross that may just clear things up.

Look over to one side of the Southern Cross and spot the constellation Centaurus – one of the largest constellations in the sky which is said to resemble the mythological half-horse, half-man creature known as a centaur. Take note of the two brightest stars in this constellation. These are known as Alpha and Beta Centauri, and are amongst the brightest of all the stars in the sky. These stunning sparklers act as pointer stars that can help you to more accurately pinpoint which direction south is. Here’s how:

How to navigate using stars in the bush Star navigation in the bush uses all the same techniques you’ll learn in any basic astronomy class.

But, navigation by stars in the African wild means that you’d also have to consider the terrain and safety considerations that go with moving through the savannah – like not stepping on a snake, or tripping over an antelope.

Take a look at Bushwise’s FGASA Professional Field Guide course and see how you can learn how to navigate using stars while becoming a field guide.

This week we had the same schedule as the week before but the two groups switched ...
BY: Taya Maasch, student 2021 At the start of the second week, I was assigned the ...
BY: Wana Bezuidenhout Camp manager blogs are written by our current students who each get a ...