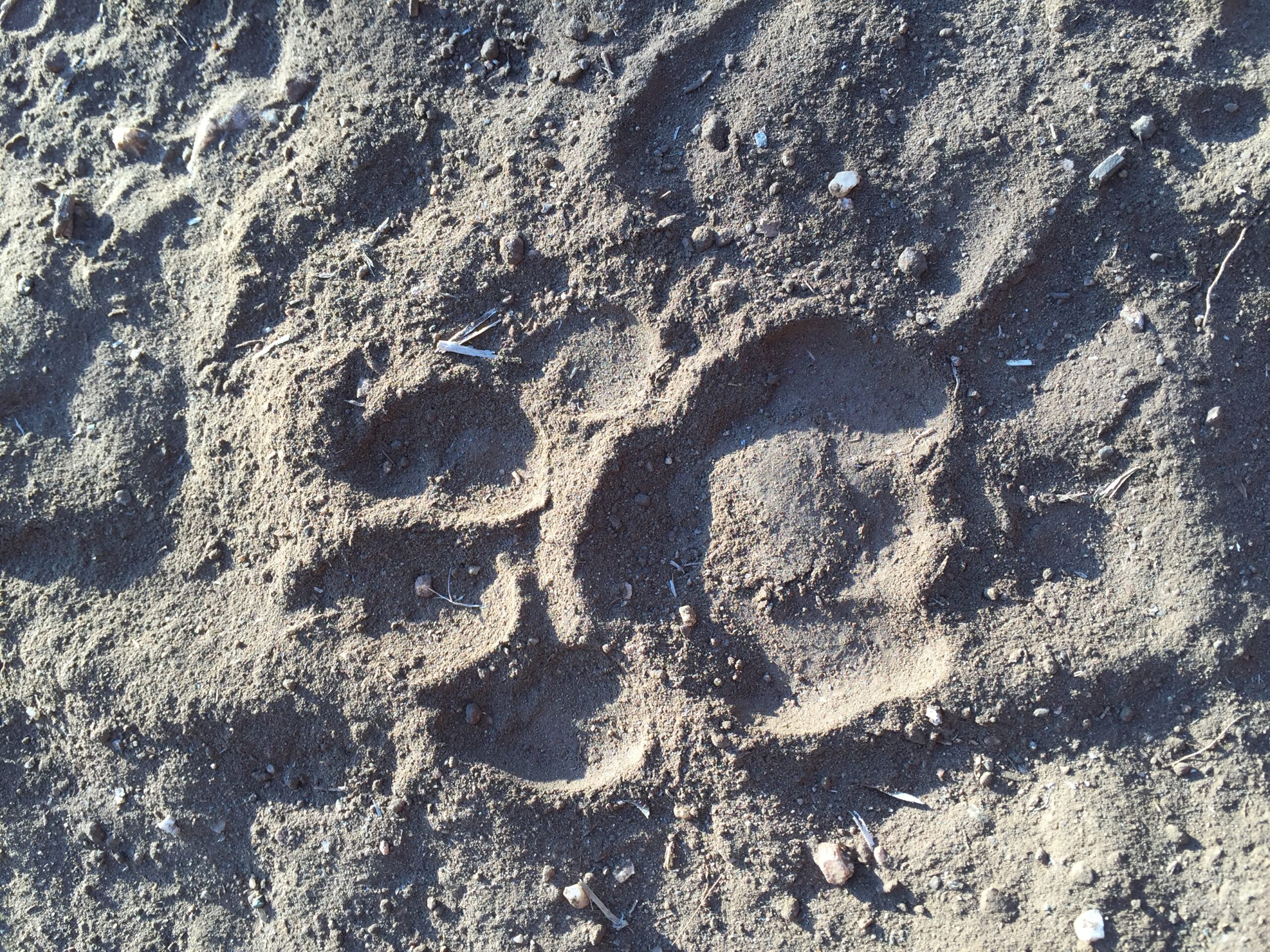 This week, following a double birthday celebration for two of our fellow Bushwise students over the weekend, we embarked on Track and Sign week with Colin Patrick to train us. Monday started with an introduction session where we each gave Colin a bit of background as to what brought each of us to Bushwise to start with. Everyone was fairly matter of fact about it in the classroom environment but it reminded me of the first braai we had three Mondays prior when every one of us, having known each other for two short days, bared our souls around an open camp fire and explained what motivated each of us to join Bushwise. At the time our head trainer Ben said that he was looking forward to seeing the difference in the group between that night and at the end of the course. Now Colin was asking us to reflect on it again but in a different light. He gave a poignant talk in which he explained that come Friday when we do our tracking assessment we should not focus on the outcome as a sign of how good (or as humans tend to judge themselves harshly, how poor) our results are at the end. No, instead we should reflect on how far we will have come and how much we will have learned between Monday afternoon when we went out for our first tracking session on the reserve, to Friday when we would be assessed. This made me reflect on our first semester so far and in this moment, it dawned on me that we have all learned so much already. We are a diverse group: 24 people of 7 nationalities, some of us had never set foot in Africa or the Bush before starting at Bushwise, and in three short weeks we’ve covered; Ecology, Geology, First Aid, Botany, Birding Theory, Reptile Orientation, and now Tracking. We’ve done 9 game drives (mostly driven by students, some of whom had never driven a manual vehicle and are now navigating bumpy dirt roads in Land Rovers and a Land Cruiser), we’ve had 1 sleep out, learned to change a tyre on our own (that probably weighs the same as some of the individuals in the group), and now Tracking… somewhere in between all of that we’ve also managed to learn to identify 30 birds from sight and sound. So where do the Flying Scrub Hare and Poo Fights fit in you ask… well, as the saying goes… work hard – play hard, so we’ve also found some time to have some fun and ignite a few fires of passion. We’ve taken to teasing each other about pretty much anything and everything to keep our humour and spirits up during the very full and busy weeks… Poor Thijs will never live down the excitement he showed as he spotted that Scrub Hare bouncing around a short distance away when, as we all turned to check it out, the wily little fella decided to transform itself by magic and take flight… never again will I be able to see a Yellow-Billed Hornbill without calling a Flying Scrub Hare sighting. Daily dung flicking and spitting competitions have become the norm during our much-needed tea breaks (the trainers even join in sometimes) and a few individuals have taken to collecting samples of all newly discovered variety of dung, much to the amusement of the rest of group, but it helps us all learn in the end and that can only be a good thing So, as we all gathered around the pool at the classroom waiting for our tracking assessment results and the start of the much needed off week, I recognise that we’ve become a family of sorts… only families are this comfortable with poo talk after all!! Well done and big congratulations to all the students who achieved a tracking level this week, and especially to Vaughn (one of our trainers) for getting that coveted Level 4!! Thank you to all the Bushwise Staff and Trainers, and to Colin Patrick this week, for sharing your passions with us, for your tireless patience and for giving us new perspectives of our world. I hope that my fellow students take time to reflect on the same and recognise the massive progress we’ve all made in such a short space of time, and how much we are helping each other along the way. I can’t wait to see how much we learn and grow over the next semester.

There are a few different options on how to get your qualification and where to do ...
Most people think us ‘bush people’ are quite strange, choosing to spend our off time on ...
BY: Tasneem Johnson-Dollie Africa is home to around a quarter of the world’s biodiversity. But, it’s ...