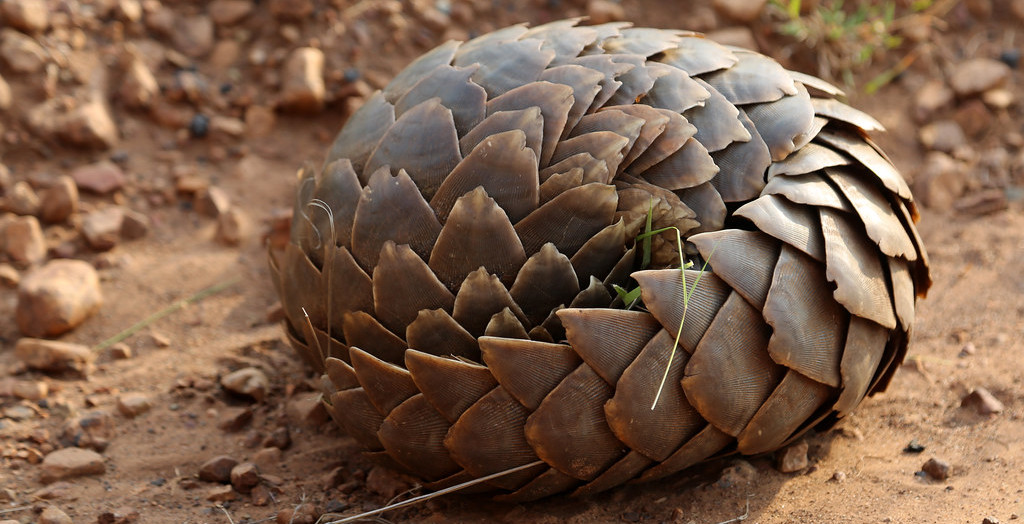 Ask any field guide about the most elusive creatures in the bush: endangered pangolins will be right at the top of the list. Talk to guests about their experiences on safari and what animals they’ve always wanted to see: a pangolin will be one of them. For those who have been lucky enough to see them in the wild, pangolin encounters will likely be one of their most cherished memories.

And yet pangolins are one of the most threatened and trafficked animals in the world. They’re disappearing at an alarming rate, and because they’re so elusive it’s almost impossible to measure the impact of these threats.

If you look at images or videos of pangolins going about their peaceful and tranquil lives, it’s impossible to imagine anyone poaching them. Yet poaching is a real issue –  and a very complicated one.

So, in honour of World Pangolin Day (20 February), the team at Bushwise Field Guides wants to look closely at what makes pangolins special, why they’re threatened, and what is being done to save them. Pangolins are scaled insectivorous mammals – in fact, they’re the only scaled mammal currently in existence! They use their scales to protect their soft bodies from threats, curling themselves up into a tight ball when threatened. Although they are usually very docile and shy creatures, they also have sharp tails that can be used in defence.

There are eight species of pangolin found in Asia and Africa, with all species protected under national and international laws. All are listed as endangered or vulnerable and decreasing. In South Africa, where Bushwise Field Guides operates, there is just one species – the Temminck’s ground pangolin.

Many people call pangolins “scaly anteaters.” At first glance they certainly have similar physical characteristics to anteaters. Pangolins use their sticky tongue to grab ants and termites out of the ground and from foliage. Their tongues can grow longer than their body length! They are truly unique and fascinating creatures, and that alone is reason enough to protect them. The Temminck’s pangolins that are found in South Africa tend to prefer savannah, grassland, and woodland habitats. They can live for an estimated 15-20 years in the wild and are predominantly solitary (although you might find some adorable videos of babies with their mom – where they ride on her back to get around!)

Because pangolins are largely nocturnal and secretive, it’s extremely rare that you’ll see one on a game drive. While some of our trainers have been lucky enough to see one or two in their lifetime, many guides go through their entire career without ever seeing one.

Despite their rarity and elusive nature, pangolins are poached heavily and tons of scales are discovered every year. The measure of this impact is not yet known.

What threats do pangolins face?

Pangolins are largely poached for local consumption and international trade. The two main uses of pangolins are scales for pseudo-medicinal purposes, and meat sold as a delicacy. Like rhino horns, pangolin scales are made of keratin, similar to fingernails and hair, and therefore have no actual medicinal or healing properties.

Although trade in pangolins has been internationally restricted by CITES (the Convention on the International Trade in Endangered Species of Flora and Fauna) since as early as 1995, illegal trade continues – and is the greatest threat to pangolin survival. According to an extensive study, nearly 900,000 pangolins were trafficked between 2000 and 2019. Photo by U.S. Fish and Wildlife

As the populations of Asian pangolins declined, there was a shift in the market and greater pressure was put on African pangolin species. This saw an increase in illegal trafficking out of Africa, as pangolins were exported to mainly Asian countries. In addition to poaching, pangolins face other threats such as habitat loss and encroachment.

Why should we protect pangolins?

The destruction of one species can have catastrophic effects on the other members of an ecosystem. In some areas of the world pangolins are known “as guardians of the forest” as they eat termites, preventing further destruction and maintaining a balanced ecosystem.

At Bushwise Field Guides we love this imagery – and absolutely believe in the importance of protecting pangolins to maintain that balance.

What is currently being done to save pangolins?

Public efforts to protect pangolins are gaining traction around the world as more and more people are beginning to recognise this unique animal – and understand its value goes well beyond its meat and scales. There are even some unique advertising campaigns (like this one featuring Jackie Chan) developed by the organisations WildAid and The Nature Conservancy, which aim to change people’s perception of pangolins. There are a few amazing organisations working to save pangolins around the world, whether through research, activism, education, or on-the-ground action. These include the Pangolin Crisis Fund, African Pangolin Working Group, IUCN Pangolin Specialist Group, World Wildlife Fund, The Nature Conservancy, WildAid, and many more. Here in South Africa, local anti-poaching organisations also prioritise pangolins, alongside other species.

Beyond supporting organisations like those listed above, individuals can make a difference in other ways. People working in conservation or interacting with tourists, such as safari guides, should be knowledgeable about pangolins and share their insights. As guides we have a powerful tool in our belt – knowledge – and educating visitors on the value of wildlife, such as pangolins, can go a long way in protecting species.

So, this World Pangolin Day, take time to share information on pangolins, promote their protection, and learn a little bit more about this incredible species!

Do you want to learn more about endangered species and become a guardian of nature? Apply today and start taking steps towards your career in field guiding.

As humans, we recognise our champions and those with very special achievements with a gold medal ...
BY: Annie DuPre, FGASA NQF2, Apprentice Trails Guide and Bushwise Copywriter The first growl was so ...
In the blink of an eye the first semester is over! We have learned a lot  ...