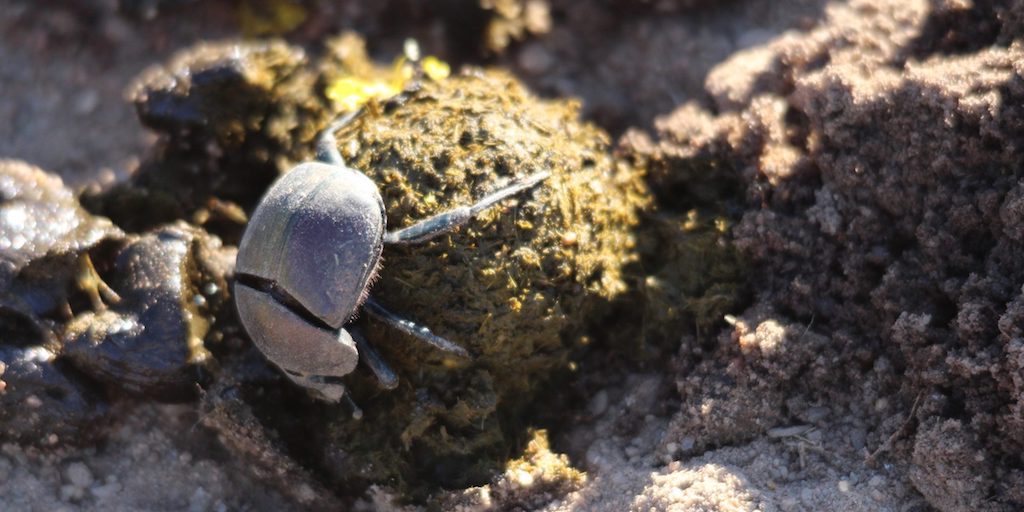 “I want to see a dung beetle!”  An easy request to fulfill in summer after good rains when the soil is soft and dung beetles come out of the ground.  They are seen all over the bush, utilize all kinds of dung, control fly numbers and break up dung to enrich the soil. “I will find you a dung beetle! Perhaps even a rhino beetle.”  We set out on our quest and shortly came across a big pile of rhino dung alive with dung beetles. Telecoprids are the ones who push balls around in the hope to attract a female. Kleptocoprids steal the balls from telecoprids.  Endocoprids live and breed inside the dung pile and Paracoprids make tunnels into the ground beneath the pile. South Africa hosts the widest variety of dung beetle species in the world, approximately 780 of the 8000 species.

At the dinner table in the middle of the bush, I see an Australian lady flick a dung beetle off the table before I could stop her.  “Critter, I know where you’ve been!” I watched the dung beetle laying on its back with its feet wiggling in the air. Not giving up, it got back on its feet and off it went on its merry way to who knows where.  Interestingly a couple of dung beetles were introduced to Australia a few years ago to help with the fly problem over there but they all shortly died after being released. Australia employed the dung beetle but not its partner, the tiny dust mite, as they were sterilized before release.  Dung beetles share a unique symbiotic relationship with the mites hitching rides on them. The mites clean up the dung between the beetle’s mouthparts and prevent the mouth from becoming immobilized.

Mid-summer, dung beetle season is slowly coming to an end.  Here and there a male is still pushing around a ball, but big piles of dung are now missing their larger inhabitants.  In the roads are multiple flattened beetles and soon their exoskeletons will be the only evidence of their existence. At this stage most of the beetles have had multiple partners, have buried over 40 dung balls with eggs and are becoming weaker reaching the end of their life.  Dung beetles bury an estimation of 1 metric ton of dung per square hectare of land per year. Their role in decomposition, seed dispersal, and control of vertebrate parasites in grazed habitats makes them a keystone species.

Safely tucked into a dung ball under the surface of the ground is an egg patiently waiting for the next rains, the next season to burrow out and be the new generation of dung beetles and entertainment for various foreign guests.

What kind of placement were you hoping for? I’ve always been interested in research and I ...
BY: Ross de Villiers Camp manager blogs are written by our students who each get a ...
By: Tasneem Johnson-Dollie When you think of a dung beetle, a busy black bug scampering across ...