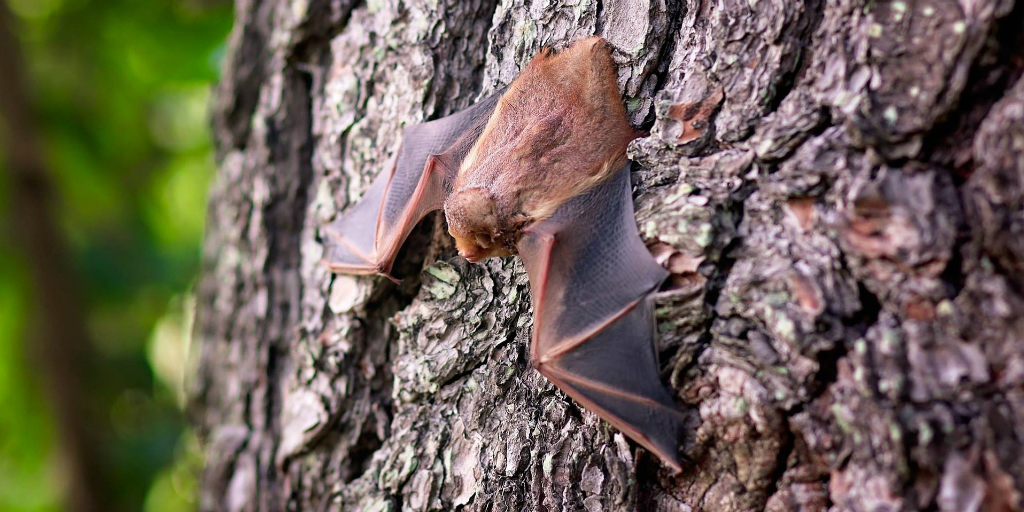 Different types of bats: how many are there?

Bats are the second-largest group of mammals, after rodents, and there are tons of different types of bats all around the world. How many different kinds you ask? Well, let’s find out.

All bats fall under the scientific name Chiroptera, a Greek word meaning “hand wing.” Bats can be found almost everywhere in the world. But these frequent fliers aren’t often seen because they’re nocturnal and spend their days resting in roosts and nights hunting for food.

But these sleeping habits haven’t deterred scientists from finding out more about these winged creatures, and filling in the gaps about the different types of bats. Here are some interesting facts about bats.

Interesting facts about the different types of bats And they all vary in size. Some bats – like the bumblebee bat – are the size of a small pebble, while others – like the giant golden-crowned flying fox – have a wingspan that measures 1.7 metres across.

Many are dark brown or black, but some – like the Honduran white bat – are white with yellow noses and ears. Some use echolocation to find their way around and others don’t.

2) There are two different categories of bats The many different types of bats are divided into two categories, microbats and megabats, according to certain characteristics.

Microbats use echolocation to navigate. They do this by emitting sound waves that bounce off of objects back to the emitter, and indicate location. They are found all over the world (except in the polar regions) and eat insects like moths and mosquitos.

Most bats are considered microbats, including vampire bats – which are the only microbats that feed on animal blood instead of insects.

Megabats are different because they have smaller ears and don’t use echolocation to find their way around. But, their keen sense of sight and smell make up for this, and mean that they can still hunt and move around quite well at night. They also live in the tropics, and their diets consist of nectar, pollen and fruit.

3) Why do bats sleep upside down? Not all bats hang upside down. But, some of the different types of bats do this when resting or sleeping.

And while scientists can’t answer the question, “Why do bats sleep upside down?” with certainty just yet, it’s believed that because bats have to fall into flight, hanging upside down is the quickest and easiest way for them to set off. Especially when they need to make a quick escape! Certain types of bats – like the different types of vampire bats – bite in order to feed on blood. But these bats are known to sink their teeth into birds, cows, sheep, pigs and horses more often than humans.

However it’s important to remember that, when provoked, even bats that don’t feed on blood will bite. Bat bites can be dangerous because they often contain rabies and other infectious agents.

But, because of their nocturnal nature, and their preference for secluded roosts, it’s not common for people and bats to run into each other.

How the different types of bats add to environmental conservation While bat bites may not seem so appealing, having bats around is actually great for the environment.

In fact, microbats alone are responsible for eating millions of insects every night. This keeps insect populations from becoming too big – which is great, because too many bugs can have a negative impact on the environment.

Another interesting fact about bats that you may not have heard before, is the role they play in pollination. Megabats are partial to sipping on plant nectar, and play a big role in the life cycle of plants by unintentionally carrying pollen from one plant to the next. Because of this, Megabats are responsible for the pollination of well-known and loved plant species, including bananas, mangoes and avocados.

But the role that bats play in the earth’s environment isn’t well understood by people across the world, and this has an impact on the survival of the different types of bats.

Human activity – like hunting, and the overdevelopment of natural environments – affects the well-being of bats, and the ecosystems they’re a part of. And as a result, the population numbers of the different types of bats is seen to be decreasing each year.

This is why efforts to conserve bats have become a global priority. Original photo: “Bats flying” by USFWS Headquarters is licensed under CC BY 2.0

How you can learn more about the different types of bats

Aching for more interesting facts about bats? Wanting to make a start in a career in bat conservation?

Well, there are wildlife courses on offer that will allow you to dig a lot deeper into the different types of bats out there, what they do in nature, and why bat conservation is key.

Take a look at our Wildlife Conservation Programs to see how you can grow your understanding of the different types of bats and add to their conservation.

BY: David Miles Camp manager blogs are written by our current students who each get a ...
Vaughan's stories continue: This was not the only encounter I enjoyed with Sam, there are too ...
Leaving the fast-paced life of the German autobahn behind, Bushwise student Marc Weber discusses slowing down ...