This week, as we do on each course, we ran our Bushwise birding week, starting with one full day spent in the classroom covering all the theory, as well some picture identification to get use to finding birds in the book, at least in the photos they can’t fly away! The remainder of the week spent just going out on drive and putting all this newly acquired info to good use. The plan was to identify as many bird species as possible, and what a success! These species included lions, elephant, the elusive leopard, rhino’s, cheetah as well as Hyena… Hey wait, those aren’t birds! Yes that’s right, our big game sightings this week were phenomenal! 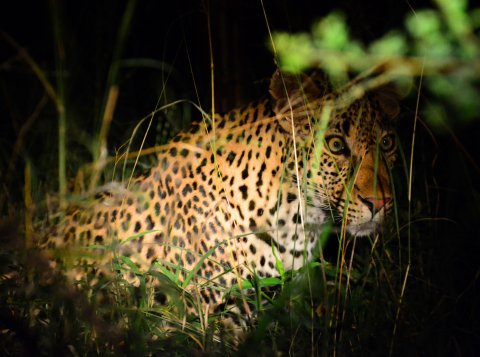 Our first day of birding provided us with some amazing views of an elephant bull near a dam, and later again found by one of our other groups, heading down the road and straight at us! Some lions decided to join one of our groups for their afternoon sundowners, and provided quite the roaring show.

Half way through the week, and everyone is getting confused with all this terminology, crested, crowned, headed all referring to the same things, but in different way, and what a better way to clear your head, than a sleepout! As most things in the bush, not everything goes according to plan all the time, and with the spot we originally wanted to sleep out at not being usable anymore after all our recent rain, we quickly put a plan B together, and in just about no time at all, had our fire wood collected and in the blink of an eye, the fires were burning under the night sky. Peaceful indeed, that was until midnight… We were woken up to the sounds of elephants trumpeting in the distance, followed by lions roaring! In your mind you can almost paint the picture of a herd of elephants encountering the “king of the jungle” and protecting their young by chasing the lions away. For the next hour or so, we could still hear the lion roaring further and further away each time, trying to recover what is left of his ‘manliness’. Somewhere during the night, we were also approached by the ever dangerous…..chameleon, which provided quite a bit of interest during the night watch. After sleepout, we managed to bump into some more ellies, and that afternoon, once again, whilst out birding, we managed to bump into some more lions, cheetah, elephant and a great leopard sighting.

Ok, now that we were successfully distracted, back to the original story, birds! Our students all did a great job of identifying all birds, and took to birding like a duck to water, pardon the pun! After covering a wide variety of habitats and areas spanning over a few reserves, we managed a great variety, including rollers, bee-eaters, eagles, vultures and lots of little brown things! We have seen and studied a large portion of the birds in the area, from the smallest, grey penduline-tit, to some of the bigger birds like fish eagles, vultures and storks. Some of the highlight birds included grey headed kingfishers, calling fish eagles and some white storks that are seldomly seen around here. All three student groups managed an average of 130 species each this week! Well done! 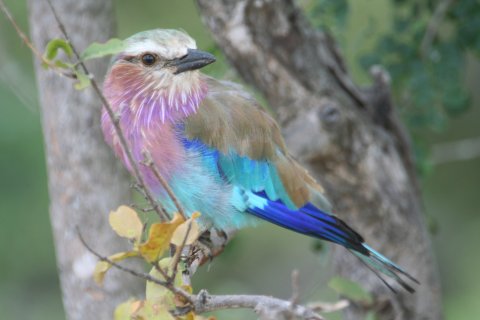 We ended off our week with a birding walk, that once again, did not end up as a birding walk… Two groups set out, and Conraad had a very interesting encounter with an elephant bull in Musth to say the least! Past students would remember seeing our lions mating a few months ago, and in recent sightings, we kept noticing that the one female had a plump tummy, and then her mammary glands started swelling, and all of a sudden the bump disappeared, and so did she! We are seeing her tracks often, but she has been hiding in all the dense areas nearby, once again, another good sign indicating the possibility of cubs! It has been months later, and this morning we finally got confirmation on this, she did have cubs, two of them! This all we managed to see within the first 10 minutes of our walk, after the call came out, was that a lion? At first we thought that the students were making a joke, but after closer inspection, in the distance, we could make out a lion shaped head in the long grass, and we decided to have a better look. 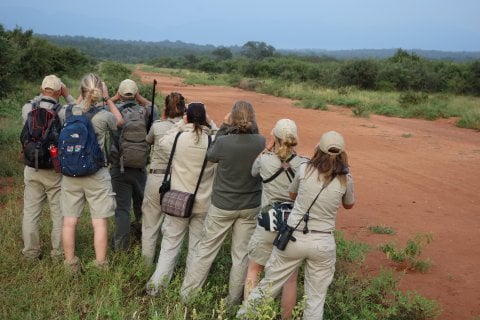 On our way closer, we also discovered another big game animal sleeping nearby, and knew that we would have to keep our distance. Using binoculars, we managed to get a great view of the two lionesses, and almost as if we had planned it, the two cubs appeared. Now I do think it is important to mention that at this point, the lions did not know about us being there! They then started to clean, and play with their cubs, definitely something you won’t see on walks often! After a minute or so, we decided that it would be better to move away from them, leaving them in peace. So far, from the small view into their lives, it looks like our resident young females, known as the Tembe’s, are proving to be great first time mom’s,, and hopefully we can follow these cubs through the trials and tribulations of their lives.

To sum it all up, it was once again, just one of those unpredictable, yet amazing weeks here at Bushwise, and always great to be out there, doing what we do best. To conclude, I think it is safe to say, birding week this week, was a great success!

Until Next Time,
Charles and the Bushwise Team