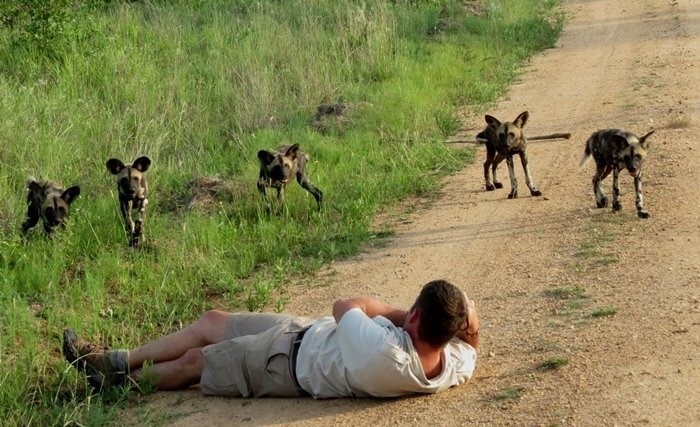 My best experiences as a Field Guide – Part 1

Those of you who know me will know that my hatred of blog writing stretches further than the reach of an ancient Baobab. I have ducked and dived, bobbed and weaved, crawled and swam, and yet I cannot escape the dreaded responsibility. However, looking back over my time as a field guide there are certain stories that deserve to be shared.

Being a field guide and spending your life running wild in the African bush for so many years you are bound to collect a tale or two, but the age-old question is where to begin. None of the moments that follow can necessarily be described as my best or worst experiences, however, any experience survived is one that must have had a positive outcome. Be it learning from my mistakes, sharing priceless moments with great people, and even more memorable moments with greater animals. But something that is without question absolutely the best thing about working in the bush is some of the characters that become a part of your life. The tales that follow are some of my favourite recollections with some of my favourite people in the bush. In order to protect the identity of the individuals involved and to try to avoid causing a wild scandal or two all of the names and places featured below may or may not have been cunningly disguised. Sam from Mohlabetsi safari lodge was a legend. He contributed to some of my greatest early experiences on Balule Nature Reserve. Sam was a small bloke, quiet, yet witty beyond measure. We spent many happy hours together in the bush tracking big and dangerous animals. A few more notable moments do, however, spring to mind.

A normal morning bushwalk involving the two of us, together with my tracker Roger,  tracking some white rhinos, turned into a moment I will never forget. The tracks seemed to age with every passing minute as they wound through the dry bushveld terrain, tracking these two magnificent beasts was proving tricky, to say the least. However, the enthusiasm of our Swedish guests kept us motivated to persevere. All three of our noses were to the ground as we followed track by mysterious track. This took us straight through a steep drainage line we assumed that the rhinos had gone straight across. So, without thinking twice we barrelled straight down after them. Little did we know that our valiant beasts, without Swedish enthusiasm to spur them on had paused for a nap at the bottom of the drainage line. And we only discovered them once the whole troop of us were also inside the drainage line mere feet away from them!

Somehow we had managed to stroll within bare metres of them without them ever becoming aware of our presence. Nonetheless we were sitting in quite the predicament. Myself, Sam,  Roger, and an unnamed guest or four, froze in our tracks with the three musketeers trying to figure out what to do next and the guests inevitably noticing our silent dilemma. There was no way around it, we were stuck. We all knew that if we made a move; spoke a word; or did anything at all; the pair of snoozing rhinos would wake up. Even a change in wind direction could affect the outcome. What made this moment so memorable to me, was neither the adrenaline, nor the predicament we were in, but rather the length of time we took dwelling, with no idea, on what to do next. It felt like hours passed as we stood there frozen, becoming increasingly fluent in “military esque” sign language as we silently debated the merits of the various options available to us. Unfortunately it seemed wholly unlikely that any of these options would result in the continued peaceful slumber of the rhinos. Eventually we agreed to sit down, we had barely creaked our stiff knees to the ground when one of the rhinos popped up, spun around and looked straight at us. Not exactly what we had been hoping for. Sam and I were in the front, Roger held the fort at the back and the guests were sandwiched between us. This positioning was key because one of the guests took it into their head’s to run. Now Roger, it should be said, is the opposite of Sam, he was built like the proverbial brick shithouse. And as the guest stood up to flee all Sam and I saw from the front was a poor, pale, middle-aged Swede being yanked to the ground by his belt accompanied by a calm, noble voice just saying: “take a picture”. By this time the second rhino (oh yes remember there were two) had also jumped up, but it seemed they were as stumped by the situation as we were. It was their turn to ponder what to do next. Then one of the rhinos started to walk closer to us, more inquisitive than aggressive. It was at this moment that we noticed that the best escape route for the rhinos was a little game path leading out of the drainage line, that regrettably sat behind us. It seemed the rhinos had noticed this too, for as we sat there quieter than mice, the two huge animals slowly and cautiously walked past us trying to get a good whiff to see what exactly we were. At this point, even the least religious amongst the group was making a set of ‘just in case’ amends. For as we sat there these two huge rhinos could nearly touch us. After a brief inspection they decided that the way out was a more interesting option than turning us into little bundles of mincemeat and proceeded with a snort as they both trotted on past us and up the hill.

With a great sigh of relief, we all have a memory never to be forgotten. Since numerous excellent articles have been published regarding the above-mention title, the writer is sharing his ...
BY: Spencer Gallant Camp manager blogs are written by our students who each get a chance ...
Bushwise student Marlene Botha takes us on an adventure in the African bush alongside her fellow ...