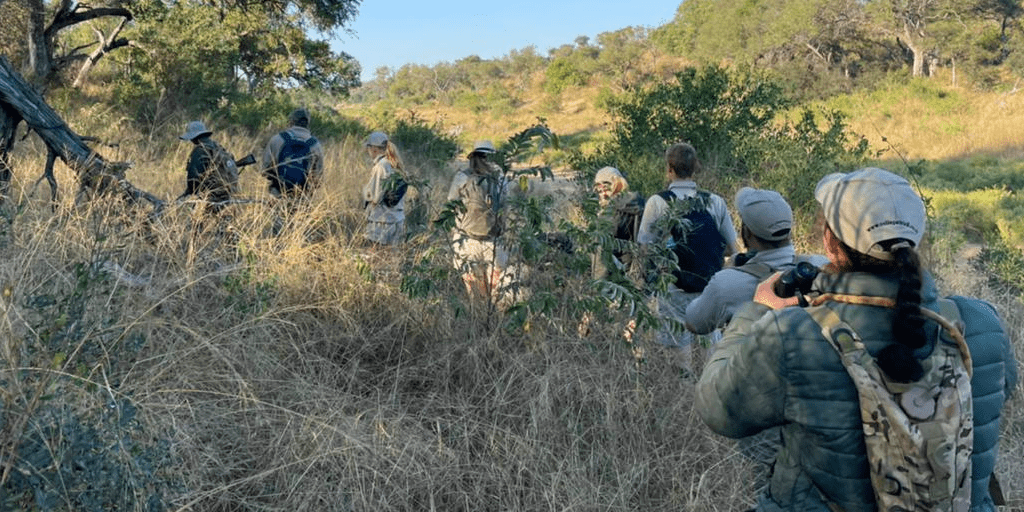 A week of walks

On 13 May, the sightings we caught on-foot were amazing. In the morning, I walked along the river with our trainer Lindi. We saw a pride of lions across the river. They saw us too, watched us for a bit, and then sped off to the rocky outcrops. We sat down and watched them while they were standing on the rocks. This was an amazing experience. The afternoon walk was great too. Jaques, who works for Colin Patrick Training, came to teach us more about trailing animals. This was loads of fun, because it’s one of my greatest passions.

We found tracks that belonged to a white rhino, on the road. From there, we partnered up and each pair got a chance to trail the rhino. On Friday night, before our off-week, I acted as the host for the evening and after dinner we played Mario Kart for the rest of the night. During our off-week, some of us went to Colin Patrick Training for the trailing course. We had loads of fun there as well, and saw amazing sightings on foot. On Sunday morning, our whole group met at Marula Bar before Jack and Lindi picked us up at the stack and store.

We had a nice braai after we arrived back in the evening. Pieter Kruger joined us for the upcoming week to participate in the walks. The sightings we caught on foot were incredible.

On the Monday afternoon walk, we had two encounters with two different herds of elephants in the same area. Tuesday’s walks were quiet, but you can’t have amazing encounters every day. Wednesday was my last day as camp manager. The morning walk was quiet again and the afternoon walk blessed us with an elephant bull sighting, 15 metres away from us. I had an absolute amazing week as camp manager, with unforgettable sightings and incredible people.

See the most interesting wildlife animals by joining one of our field guide courses.

Original photo: “Scaly Anteater” by David Brossard is licensed under CC BY 2.0 BY: Megan Colborne With ...
Photo by: Callum Evans The images in this article were taken pre-COVID-19. BY: Matthew Nash Camp ...
By: Samuel Bramley We arrived back on campus, feeling well-rested and relaxed after our first week ...